18 Sports Halls of Fame that are actually worth visiting……

18 Sports Halls of Fame that are

HALLS OF FAME weren’t originally meant for sports. The country’s first hall of fame was a sculpture garden dedicated to great Americans on the University Heights campus at NYU. That was back in 1900, and it was 39 years before baseball’s hall of fame opened its doors. Since then high schools, colleges, and pro teams both major and minor league have opened their own halls of fame. As well as halls — both real and virtual — for nearly every sport you can think of.

Some of those halls, however, come with world-class museums attached too. Or at least exhibits that will teach you more than you ever knew about the sport. Here are 18 around North America you should absolutely visit. 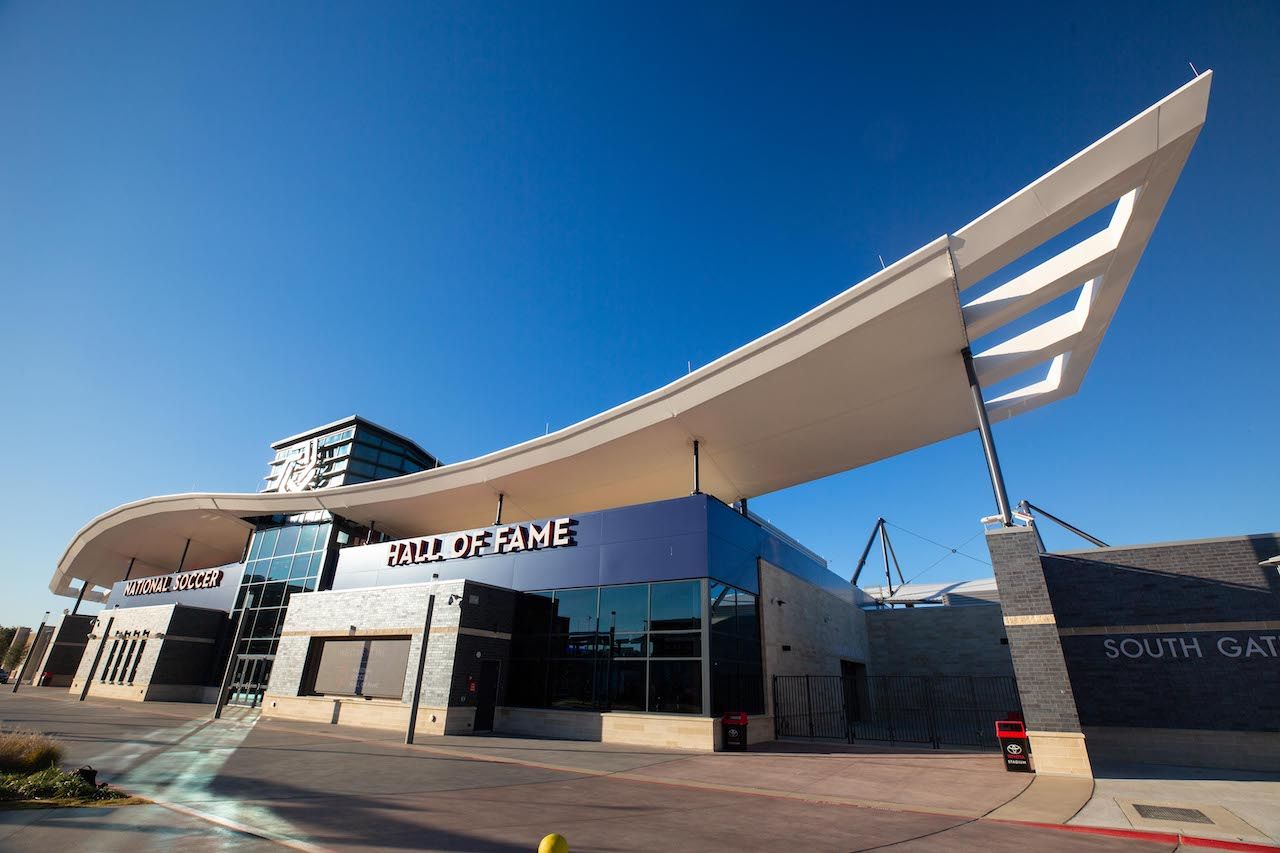 Part of Toyota Stadium in Frisco, one of the newer halls tells the story of how soccer became a viable pro sport in the US. Beyond simple history and artifacts from over 200 inductees, the interactive museum offers stand-up platforms where guests can test their skills against video versions of soccer legends. It’s also the first US hall to use facial recognition software, so exhibits respond to visitors as they walk through.

Oklahoma might seem an odd place to put the gymnastics hall of fame until you realize Shannon Miller, Bart Conner, and Nadia Comaneci all live there. The museum sits inside Science Museum Oklahoma, a permanent exhibition of gymnastics history and hand-drawn portraits of its 98 inductees. 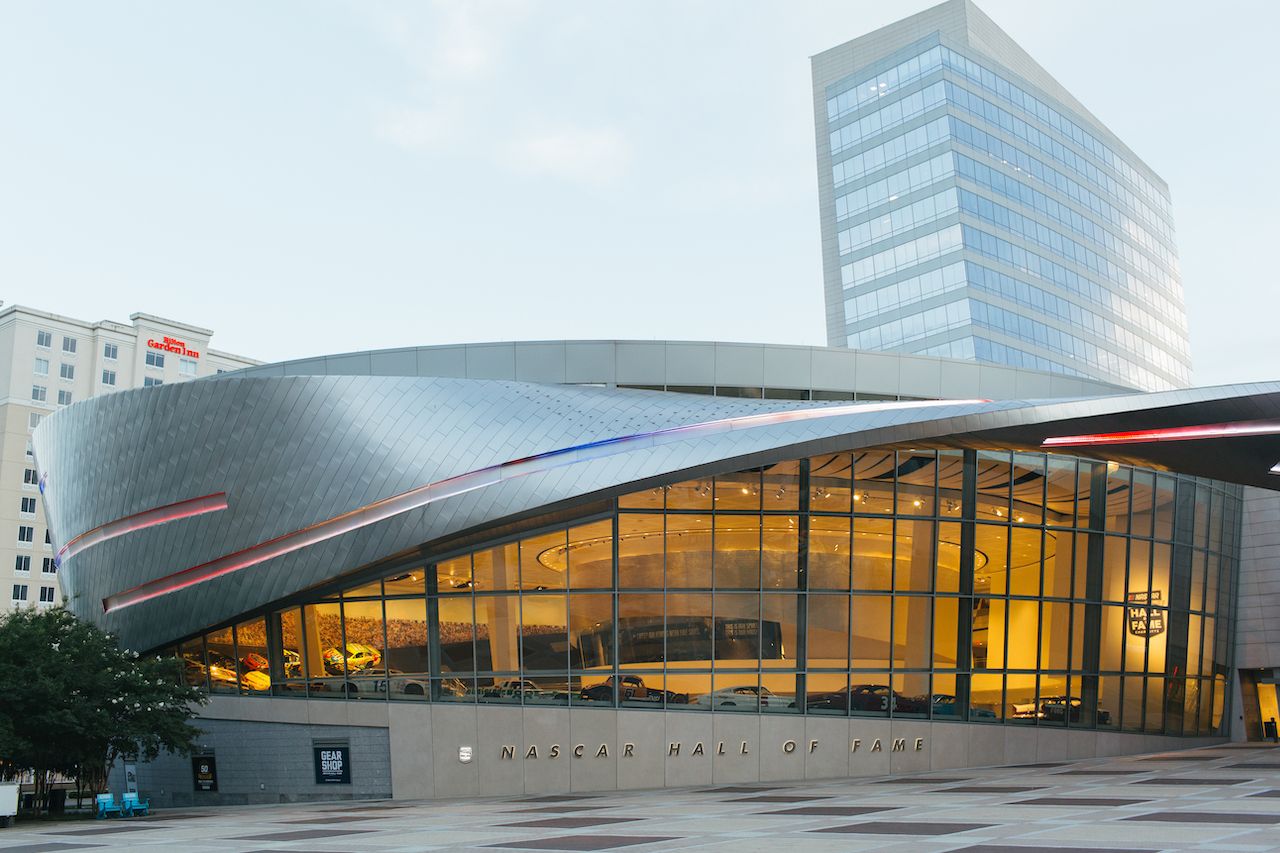 This attachment to the Charlotte Convention Center tells the almost-unbelievable story of how a meeting at a hotel in Daytona Beach, Florida, launched the most successful auto racing league in history. You’ll walk up a ramp with replica cars banked on turns from different tracks then enter the hall of its 50 inductees. There’s also an interactive section, with stock car simulators and air-powered tools so you can time yourself changing tires like a NASCAR pit crew. Word to the wise: Avoid this area when school groups are visiting.

This building, which sits between the Intracoastal Waterway and the Atlantic Ocean, is home to a massive collection of aquatic artifacts paying tribute to the best in swimming, water polo, diving, and synchronized swimming. You’ll also learn about US presidents who were also accomplished swimmers and see wraps, uniforms, and Olympic medals from the sport’s greatest athletes.

Perhaps America’s most revered hall of fame, the Baseball Hall of Fame is home to 323 inductees with names like Ruth, Mantle, Mays, and Aaron topping the list. It sits in the quaint village of Cooperstown, nestled next to a lake in the Catskill Mountains, and draws over a quarter-million visitors a year. The exhibits feature items from some of the game’s most memorable moments, alongside uniforms that date back over 100 years. And for those looking for a heavy dose of childhood nostalgia, no museum comes close.

Just to clear up any confusion, there is also a National Wrestling Hall of Fame with locations in Waterloo, Iowa, and Stillwater, Oklahoma, dedicated to talented grapplers and world-class athletes, exactly zero of whom you’ve probably heard of. But if you wanna see the tights, costumes, and props you saw on Monday Night RAW, head to Wichita Falls to this unofficial museum, which is adorned with more pro wrestling artifacts than you’ll find in a single other place. Plus, admission costs less than lunch. 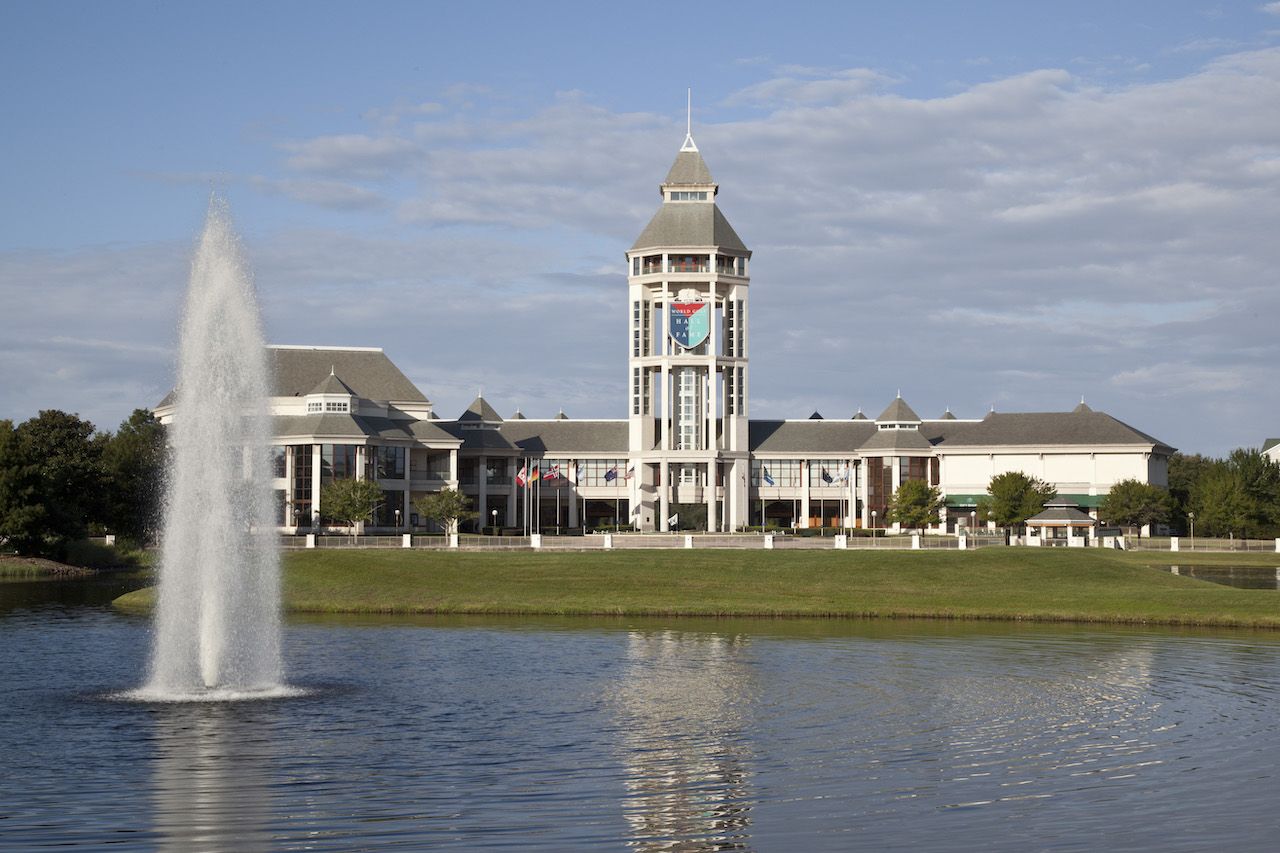 Much like the game itself, golf’s hall of fame is a serene, relaxing experience set along an idyllic lake in historic St. Augustine. Just a few miles from the PGA Tour’s headquarters in Ponte Vedra, the World Golf Hall of Fame isn’t just a museum but an entire village complete with hotels, golf courses, and the PGA Tour academy where you improve your game after being inspired by the greats.

One of the more architecturally interesting halls of fame sits in the “birthplace of basketball” just off Route 91 in Springfield, Massachusetts. The building is meant to look like a giant, light-covered basketball going into a net, and while the proportions are a little off from the real thing, it’s still a sight to behold. Inside, you’ll find the story of the game alongside exhibits on the over-400 inductees. Plus, a full-sized basketball court that plays host to high school and college competitions. 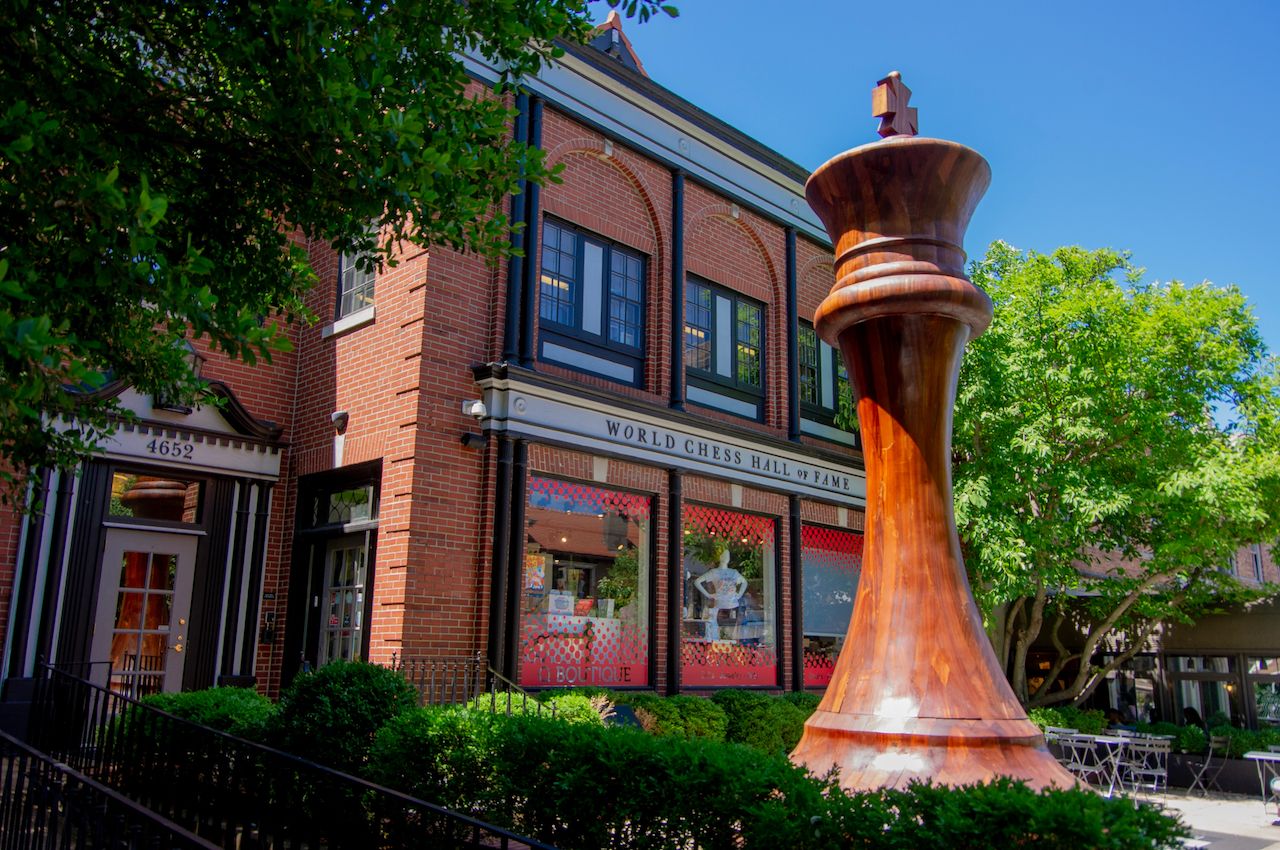 Since most Americans can’t name a single chess player after Bobby Fischer, this museum in St. Louis’s Central West End offers a lot more than a tribute to the game’s greats. You’ll also find chess-inspired art exhibits, classical music concerts, and even artist-designed mini-golf. There’s also exhibits on the game’s evolution in both the US and the world, with both American and international halls honoring its best players.

Admission: suggested donation of $3 per person

A sport where animals are half the attraction seems an appropriate hall of fame to offer animal interactions. During the summer, the Pro Rodeo Hall of Fame brings in retired bucking broncos, and guests have the opportunity to learn the horses’ contribution to the sport. Summer also features live roping competitions and convention rodeos, adding an element of action to a museum visit. And you’ll get an education in the history of pro rodeo and its role is Western culture inside the galleries. 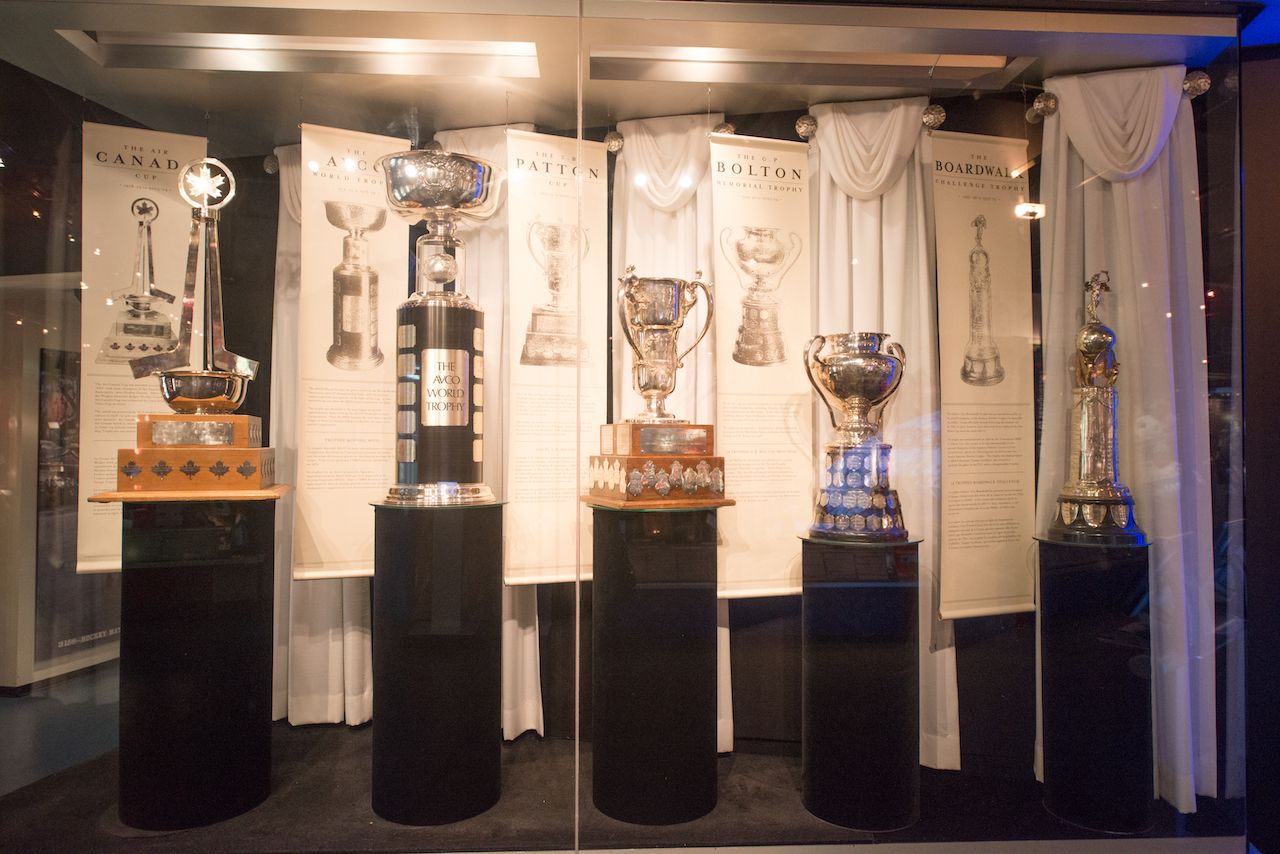 Unlike most sports, where a new championship trophy is minted each year, hockey has but one Stanley Cup. And it lives in this 57,000 square foot museum at Brookfield Place in downtown Toronto. In addition to seeing the Cup, you’ll also tour the great hall with tributes to its 411 inductees, as well as walk through a replica Montreal Canadiens locker room and a terrifying wall of goalie masks. You’ll also have a chance to see if you can fill Don Cherry’s shoes when you call a game at the Broadcast Zone.

We kind of take for granted that figure skaters are able to spin themselves through thin air, do flips, and land perfectly on a razor-thin metal blade. The physics of it all is mind-blowing — and broken down for you explicitly at America’s foremost figure skating museum. You’ll also see outfits worn during Olympic and national competitions, as well as figure-skating inspired art. 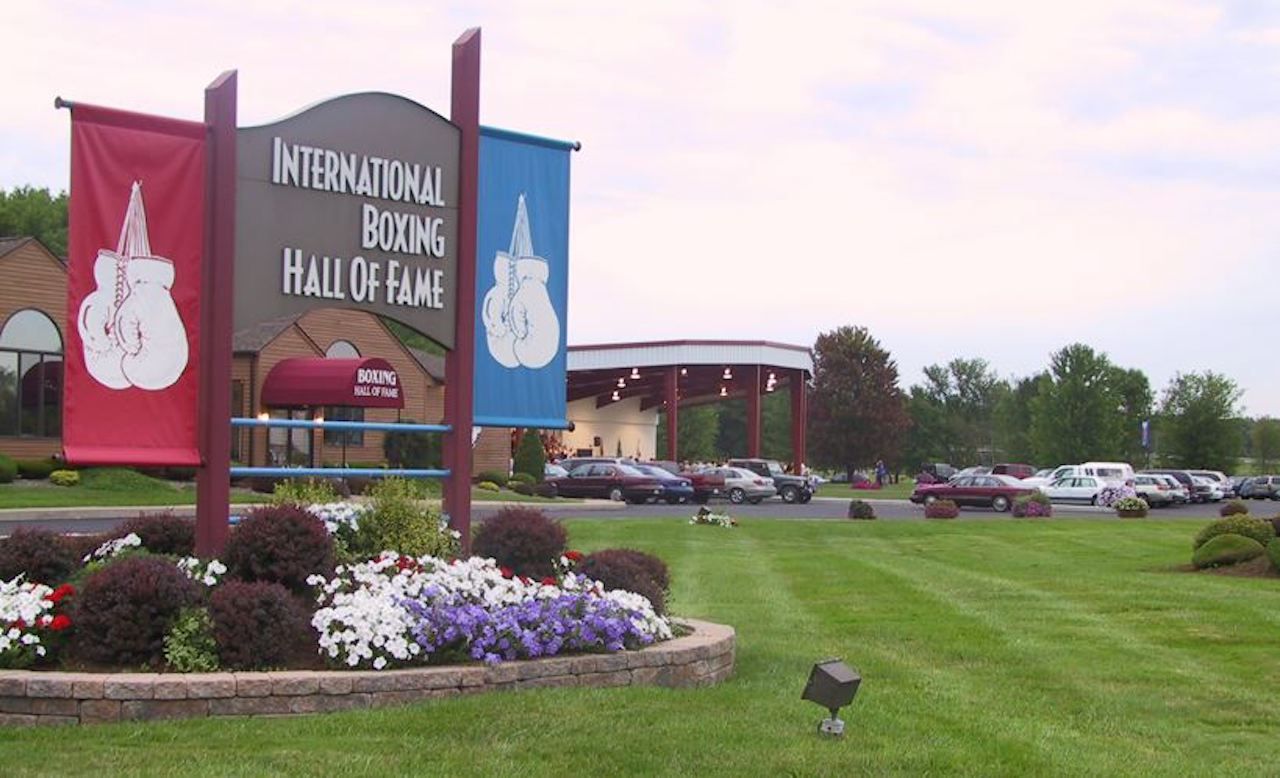 For a sport that dates back centuries, boxing has a relatively new hall of fame, only opening its doors in 1989. The exhibits inside tell the long history of the sport, with gloves and apparel from the 1900s, championship belts, and trunks worn by great champions. You’ll also have the chance to watch classic fights you may have only heard about and see the actual ring from Madison Square Garden where Muhammad Ali fought Joe Frazier in 1971.

The first thing you’ll learn upon going to the volleyball hall of fame is that volleyball was, in fact, invented at a YMCA in Holyoke in 1895. You’ll see how the sport went quickly from a cold New England gym to the sands of Hawaii 20 years later, and how the game on sand surpassed its indoor predecessor in popularity. Though most of the 130 inductees aren’t names you’ll necessarily know, the museum is still a fascinating look at a game so many play but know little about. 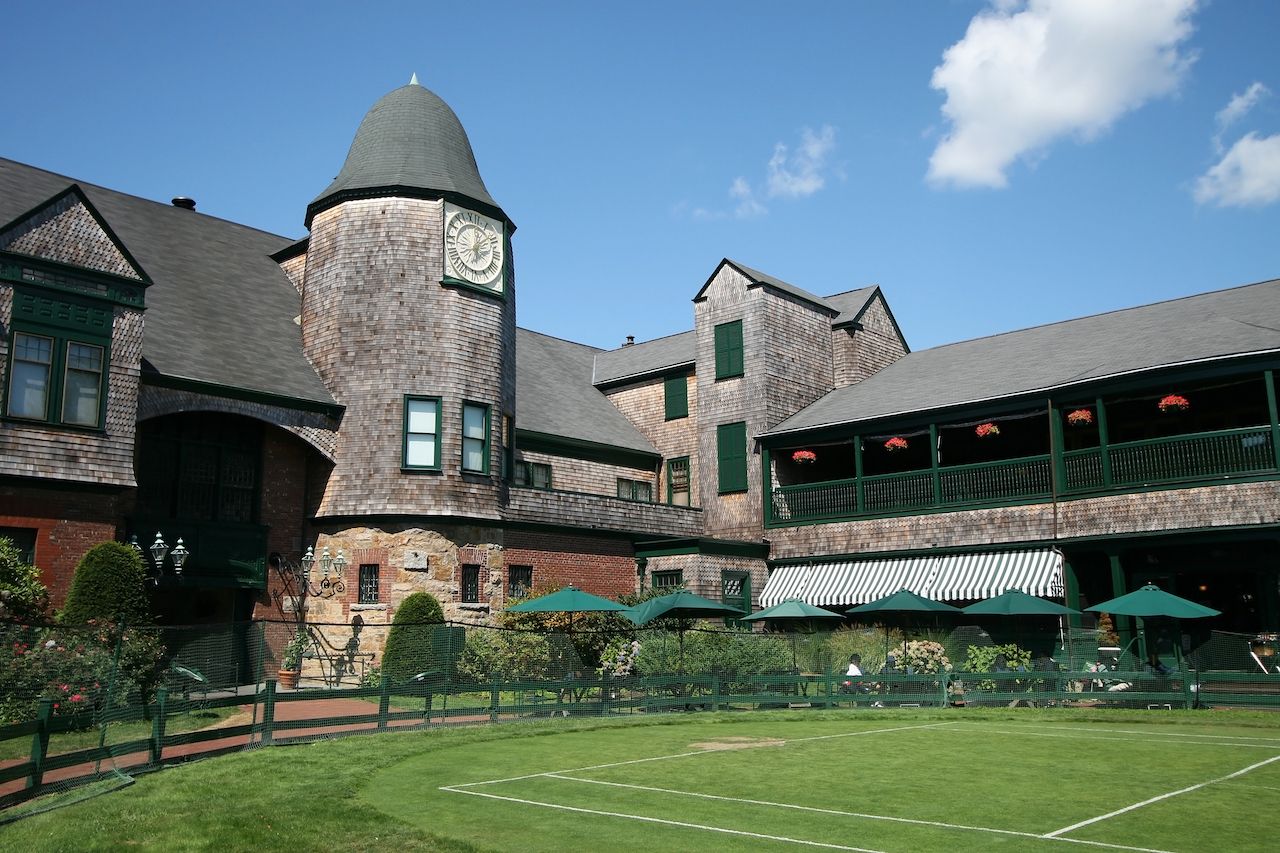 Tennis holds the distinction of being the only hall of fame set in a National Historic Landmark, the grand Newport Casino that played host to the first US Men’s National Singles Championship in 1881. The casino’s grass court still hosts matches from time to time, but the main draw is the museum, full of rackets, outfits, and other remnants from the sport’s 900-plus years. In addition to learning how the professional game has evolved from its genteel roots in the 1800s, you’ll also have a chance to get some tips on your game from a holographic Roger Federer, and whisper your way through calling a classic match.

Pro football offers one of the eerier halls of fame, where its enshrinees all have bronze busts lining the main gallery, giving visitors the feeling of walking through a room of floating heads. Not weird enough for you? Head to the “Game for Life” theater where long-dead legends George Halas and Vince Lombardi give holographic presentations. That weirdness aside, the museum has an unbelievable collection of Super Bowl artifacts and is also home to the Black College Football Hall of Game. 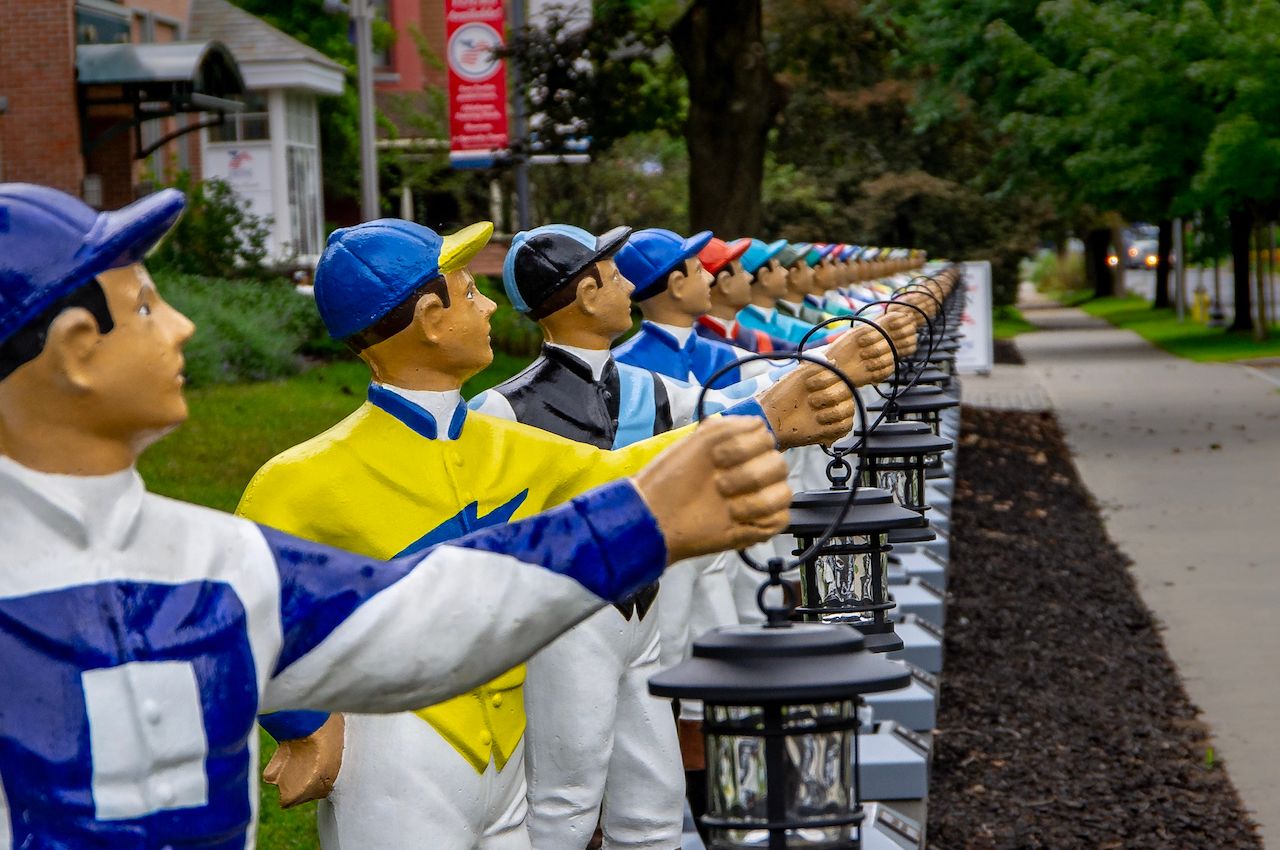 Since the most legendary names in horse racing are, appropriately, horses, this tribute to the sport of kings in upstate New York is as much an art museum as a showcase of the athletes. Guests can wander among 70 sculptures that capture the power and beauty of thoroughbreds and transport themselves to a time when horse racing was more popular than football through an extensive photo exhibit. The physical hall of fame — where you’ll see jockey colors and plaques honoring the horses, jockeys, and trainers who ruled the track — is under renovation now but will reopen in July 2020.

Think you caught a pretty impressive fish on your last bass excursion in the Ozarks? See how you stack up to some of the world’s best anglers at the Bass Fishing Hall of Fame. This relatively new hall opened in 2017 as part of Johnny Morris’s Wonder of Wildlife, an exquisite recreation of most of the world’s landscapes and environments, complete with an aquarium that feels like walking inside a shipwreck.