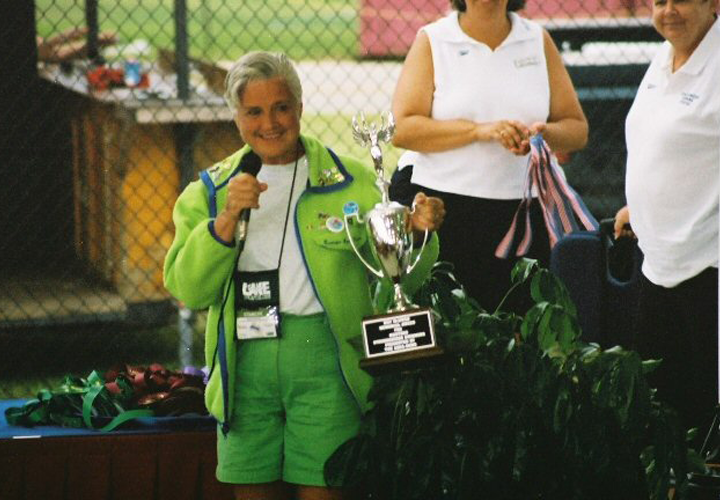 Carey has been the Aqua Masters team representative since 1994 and has been active with the overall structure of USA Synchro’s Masters program, including being a Masters Athlete representative one year at the USAS Convention. When the team looked like it might not survive, Carey was the constant that kept the team going.

Carey swam water ballet with Cortland State Teacher’s College (now SUNY at Cortland) and was quoted as saying, “There is no comparison between the water ballet of my college years with synchronized swimming of today.”  Carey got a degree in  from Cortland State Teacher’s College in 1959 which is now SUNY (state university of ) at Cortland. We had a water ballet club based on Esther Williams swimming.  She was elected to the Cortland College Hall of Fame in 2000 for swimming as a sport for life.  Beth also won the Mae McEwan Award in 2006, which is an award given to “Someone who has made Outstanding Contributions to and best exemplifies the spirit of Masters synchronized swimming.”

Continuing to swim as much as possible, she recently received a clean bill of health after a battle with Pancreatic Cancer. She credits synchronized swimming for her  and for giving her the energy she needs for her five children, 22 grandchildren and seven great-grands.

“Exercise,” Carey says, “is the most important thing as you age.” Now, at 81, she is still in fantastic shape. “I know that the swimming plus daily exercise is keeping me healthy as I am in my 80’s. My goal is to compete into my 90’s.”

Carey will be inducted as part of a group of nine (9) outstanding individuals will be inducted at the IMSHOF’s annual ceremony. The event will be held at the Hyatt Regency Jacksonville Riverfront in conjunction with the 2018 United States Aquatic Sports XXXVIX Convention.

About IMSHOFThe purpose of the IMSHOF is to promote a healthy lifestyle, lifelong fitness and participation in adult aquatic programs by recognizing the achievements of individuals who serve as an example for others. To be considered, honorees must have participated in Masters programs through at least four different masters age groups and are qualified by an objective point system based on world records, world top 10 rankings and World Championship performances. The IMSHOF is a division of the International Swimming Hall of Fame, in Fort Lauderdale, Florida. For more information, please visit: www.ishof.org

About ISHOFThe International Swimming Hall of Fame, Inc. (ISHOF), established in 1965, is a not-for-profit educational organization located in Fort Lauderdale, Florida, USA. Recognized by FINA, the International Olympic Committee’s recognized governing body for the aquatic sports in 1968, its mission is to preserve the history of swimming, celebrate the heroes, promote the benefits and importance of swimming as a key to fitness, good health, quality of life, and the water safety of all children and adults, and connect older generations of swimmers to youth.