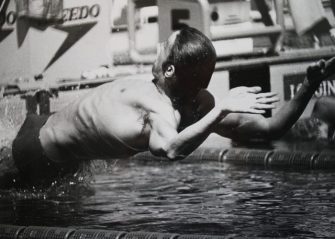 Roland Matthes, like that other great backstroke Hall of Famer Adolph Kiefer, is known as much for how long he did it as for what he did, which was to stay unbeaten in world competition for seven years between 1967 and 1974.  During this period he broke the 100 meter backstroke record 7 consecutive times and the 200 meter backstroke record 9 times.  This supreme swimmer from East Germany was the best in the world on his back winning both the 100 and 200 backstroke in 2 Olympics — back to back (1968 and 1972).  He was also a world class butterflyer and freestyler winning the silver medals in the European Championships in both.  His final act in swimming was the “world’s fastest marriage” as he joined forces with superstar Kornelia Ender in May, 1978.