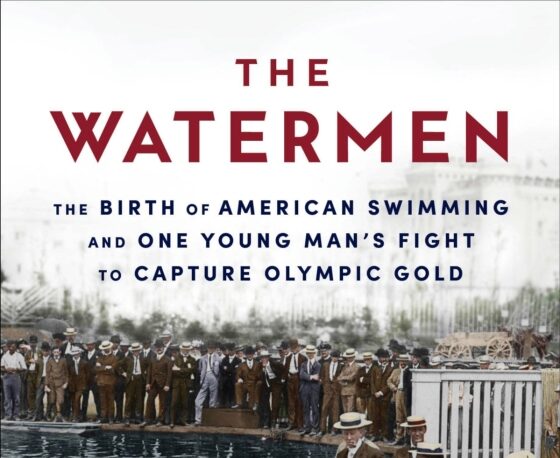 Sportswriters and historians are constantly on a quest to rediscover a hero or event, forgotten by time, whose story could be immortalized in a book or on film.  And once or twice in a decade, one of these stories captures the imagination of the public and becomes a runaway best seller, like Laura Hildebrand’s “Unbroken”, Daniel Brown’s “Boys in the Boat” or Julie Checkoway’s “Three-year Swim Club.”  Add “The Watermen,” by Michael Loynd, to this illustrious list. By profession, Michael Loynd is neither a sportswriter, nor a university trained historian. He also wasn’t looking to write a book when he took his wife and four kids to Europe for a family vacation in 2013, but it was that vacation that would indirectly (and serendipitously) lead him to the story of “The Watermen.”  What Michael Loynd is, is a lawyer, philanthropist, community board activist and a big dreamer who tells an incredibly well-researched story in a  wonderfully-entertaining and enlightening manner that will keep you turning the pages and wanting more.

It was while passing through some small Swiss towns in the Alps, that had only hosted an Olympic event — not necessarily the entire Games — that Mike Loynd noticed they all proudly displayed the Olympic rings, and he wondered why his home town of St. Louis  – which had hosted the first American Olympics didn’t do the same.

When Loynd returned home, he teamed up with the St. Louis Sports Commission to lobby the I.O.C. for the rights to the Rings and establish an Olympic Legacy program. And five years later, thanks largely to Mike Loynd, the Rings returned to St. Louis, in 2018 -114 years after the city had hosted the III Olympiad in 1904.

It was while researching his Olympic City Legacy Project that Loynd stumbled across the name of Charles M. Daniels for the first time. He was “stunned” that he had never heard of Daniels before then.  For Daniels had not only won America’s first individual Olympic gold medals in swimming in St. Louis (in 1904) but his record of winning eight Olympic medals (1904, 1906 & 1908) stood for more than six decades, until iMark Spitz took his total to nine in 1972.  What Loynd found even more amazing was that there had never been a biography written about Charley Daniels, and the role he played in the early history of Olympic and American competitive swimming.

For most of the nineteenth century, swimming had been “synonymous with indecency, the uncouth, and the poorest and dirtiest of society,” writes Loynd. But by the time Charley Daniels was born, in 1885, swimming had become synonymous with the privileged elite, those who could afford to learn in unpolluted private natatoriums, afford membership in exclusive athletic clubs or the expense of vacationing at the seaside resorts of Newport, Long Branch and Cape May.

It was into this world of financial and social privilege that Charles Daniels was born. His illustrious grandfather and namesake had been a congressman and served as a New York Supreme Court Justice for 28 years. His mother was a descendent of Massachusetts Senator Daniel Webster and her father was the owner of Buffalo, New York’s most successful dry goods store.  His parents, Tom Daniels and Alice Meldrum, grew up in mansions a short distance from each other on Buffalo’s Millionaire Row.  When they married in 1884, it was the most anticipated social event of the year in Buffalo.  Among the Who’s Who of guests were Judge Charles Folger, a distant cousin of Benjamin Franklin, the Secretary of the U.S. Treasury, William Waldorf Astor, one of America’s richest men, and the Governor of New York and next President of the United States, Grover Cleveland.  But while Charley Daniels might have been born with the proverbial silver-spoon in his mouth, that didn’t mean he was free from having to overcome enormous personal challenges growing up.

His father, Tom Daniels, turned out to be a self-absorbed, narcissistic womanizer who squandered not only his own inheritance but most of his wife’s, on luxuries and failed business schemes. One day, Tom took the family to the beach where he spent the time showing off he athletic and aquatic talents.  When Charley expressed interest in learning to swim, Tom took him to a natatorium. Without any instruction, Tom pushed his son into the deep water – with the mandate to “Swim!” Not surprisingly, Charley sank and almost drowned. After that failure, Tom wasted no opportunity to shame or embarrass the boy in public. Before Tom could do any more damage to Charley, Alice kicked Tom out of their rented apartment in New York City.

Divorce is commonplace today, but in 1900 it was socially unacceptable – and even scandalous, especially for women. For their own survival, Alice and Charley had to maintain the public facade of an intact family as long as they could. But Tom was living openly with another woman and then got caught in an investment swindle that made him as notorious as Bernie Madoff. Alice had no choice but to take the nuclear option to protect what was left of her dignity and inheritance.

As a single mother, Alice struggled to free Charley from the crippling anxiety, depression and sense of worthlessness that was overwhelming his life. She took him to private swim lessons, where a competent instructor helped him overcome the trauma of his near drowning experience. Charley was also small for his age and physically weak. American’s newest hero, Teddy Roosevelt, had overcome anxiety and physical weakness in his youth by “strenuous activity in the great outdoors.” So Alice took Charley to a lodge in upstate New York where he received his first introduction to woodmansship: camping, canoeing, hunting, hiking and shooting.

Returning to the city, Charley found a new father figure in Dr. Phillip Seixas, the athletic director of his high school.  “Doc” Seixas was graduate of Columbia University, a medial doctor and an all-around athlete who counted Teddy Roosevelt as a friend and admirer. Like he did for all the boys at the school, “Doc” tried to find a sport Charley could enjoy and excel at. He tried running and high-jumping, baseball, the new sport of basketball and gymnastics, all to no avail.  “Doc” also ran a summer camp that fostered scouting and woodsmanship. While Charley truly loved the outdoors and became an expert woodman, what he wanted to do most was prove to himself he could become as good a swimmer as he father – and someday, win his fathers respect. One of the rituals at the camp was was to start each day with a swim and “Doc” helped Charley develop a respectable stroke.  If Charley was to have any chance to become a real “swimmer,” “Doc” knew the boy would have join one of the elite athletic clubs.  But as the son of Tom Daniels, he also knew that Charley would never be socially accepted as a regular member at any of the important clubs. but there was a back door – as an athletic member – if he could just overcome his anxieties and pass a tryout.

To help him gain a psychological insight into Daniels and coaches who helped mold him, both psychologically and physically, into the greatest swimmer the world had ever known, Loynd interviewed mental health experts about anxiety and researched the era’s knowledge of and approaches to mental health. He also interviewed Olympic gold-medal swimmers, including John Naber, Debbie Meyer, Rowdy Gaines, and Matt Biondi about the emotional roller coaster athletes go through when competing on the world’s biggest stage. The Watermen is not just a book for swimming enthusiasts like myself –  it is for anyone who enjoys a good underdog story.  But it is also the entertaining story of an era, when America rose to become an international economic powerhouse and when swimming had an incredible, albeit under-appreciated impact on American culture, from the way people dressed in public to women’s rights, and to a modern concept of how people spend their leisure time. And Loynd is a master at using his extensive background research and knowledge to bring Daniels, and the era in which he lived back to life – as only someone totally committed and passionate about his subject can do.  For his efforts, I give Mike Loynd a gold medal for literature and I think you will too.

This is a wonderful book, what a great choice!!