Simply put, Boris Popov went from being an outstanding water polo  to an extraordinary coach whose teams dominated world water polo for over a decade.  Due to his success as a coach for the Junior Team in USSR, he was selected to lead the USSR National  Team.  There he lead the team to gold medals in the Olympics, European Championships, World Championships, and World Cup competitions.  He remains active in water polo still to this day developing children’s water polo in the Leningrad .

Boris Popov will be inducted into the International Swimming Hall of Fame as a member of the Class of 2019 during the Honoree Induction ceremony in Fort Lauderdale, Florida, May 18, 2019. 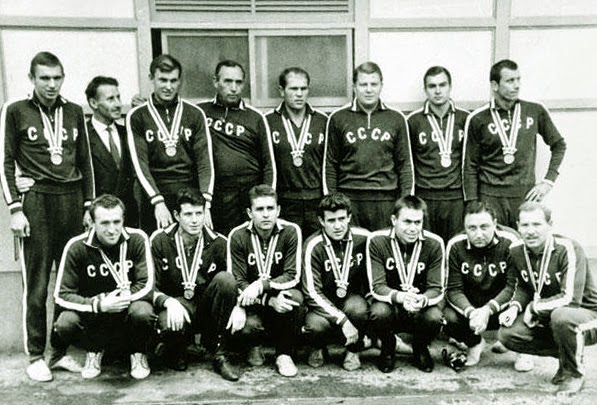 Popov began his playing career in Moscow at about age 14, for “CSK” Moscow.  He was part of the 1964 USSR Olympic Team when they won the bronze medal behind water polo powerhouses Yugoslavia and Hungary.  He was also part of the team that won the gold at the 1966 European Championships. 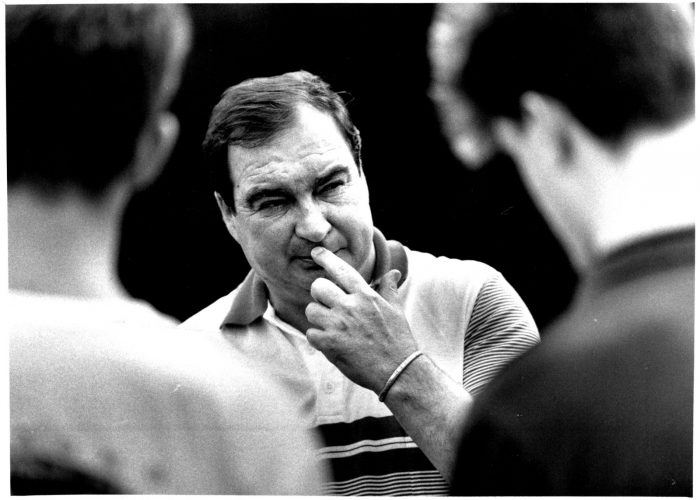 The Soviet Olympic Team won the 1972 gold medal in Munich, but at the 1976 Montreal Olympic Games, the team placed a disappointing eighth. And for the next several years failed to reach the podium at all major international tournaments.

Popov’s success with the Junior Team was noticed and in 1979 he was selected to lead the U.S.S.R. National Senior Team.  With the core of players he developed at the Junior level, like Hall of Famers, Evgeny Sharanov, and veterans Aleksei Barkalov and Aleksandr Kabanov, Popov led his team to the gold medal in their hometown of Moscow, at the 1980 Summer Olympics. 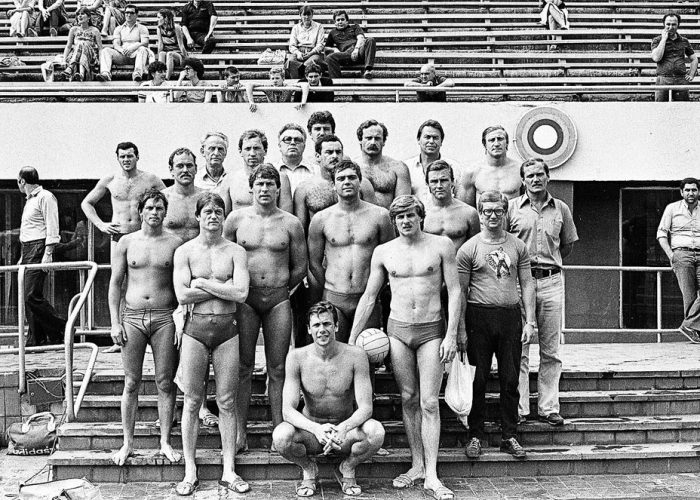 The Soviet team did not lose a game during the entire Olympic tournament at the 1980 Games. They went undefeated again at the II FINA World Cup in Long Beach, California in 1981. Won gold again at the 1982 FINA World Championship in Guayaquil and again at the 1983 FINA World Cup in Malibu, California.  Unfortunately, the world never got to see what the Soviets could do at the Los Angeles Olympic Games due to the Soviet Block’s retaliatory boycott in 1984.  However, after the 1984 Olympic Games concluded, the Soviets won the gold at a tournament in Havana, Cuba that featured the nations who boycotted the LA Games.

Because the Soviets, Hungarians and other nations had boycotted the LA Games, they were banned by FINA from the 1985 World Cup – but the Soviet success continued by winning the gold medal at the European Championships in 1985 and 1987, and at the 1988 Seoul Olympic Games, the team won bronze. After winning the 1989 European Championships, the team won bronze at the 1992 Olympic Games in Barcelona. 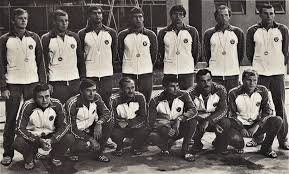 In the years 1993 and 1994, Popov left Russia and went to Geece and his former player and assistant coach, Aleksandr Kabanov took over the team. But after   the Russians finished a disappointing fifth in the 1996 Atlanta Games, Popov was back in charge of the Soviet team and directed with getting the team ready for Sydney 2000.  The team placed fourth in the 1999 FINA World Cup, in Sydney, Australia.

After so much success, the failure to reach the podium in 1999 and 2000 was a major disappointment and the Russian Federation returned the reigns of the team once again to Kabanov.  But with poor results, Popov was back in charge by 2006 until he retired in 2008.

It must be said that after the break up of the Soviet Union, there was a great deal of social and economic problems that had a devastating effect on the fortunes of Russian water polo.  They are just now recovering. 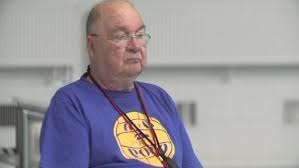 Currently, Boris Popov is the Vice President of the Russian Water Polo Federation.   He is living in the city of Kirishi and devoting his time to the development of children’s water polo in the Leningrad region.

ISHOF will also present the 2019 Gold Medallion Award to Dr. Joseph B. MacInnis (CAN).

Good day !!
We are Christian Organization formed to help people in need of help,such as
financial assistance, Do you need a loan to pay your bills? Do you need
Personal Business Car or Student loans? Need a loan for various other
purposes? If yes contact us today.
Please these is for serious minded and God fearing People.
Email: (jacksonwaltonloancompany@gmail.com)
Text or call: +1-586-331-5557.
Address is 68 Fremont Ave Penrose CO, 81240.

☑️ ☑️ DO YOU NEED TO REPAIR YOUR CREDIT AND BOOST YOUR CREDIT SCORE??? TAKE YOUR TIME TO READ 🔘

No matter how bad your credit is right now, the damage isn't permanent. Credit repair allows you to fix the mistakes hurting your credit and improve your credit score.
Repairing your credit is critical to saving money on insurance, loans, and credit cards, but that's not the only reason to repair your credit. Better credit opens up new employment opportunities, even promotions and raises with your current employer. If you dream of starting your own business or just want the security of knowing you can borrow money when you want to, you should repair your credit sooner rather than later.

Our Credit repair softwares and HackTools enables our Specialists/Hackers to correct errors and inaccurate informations in your credit reports and to boost your Credit Scores.

☑️ COMPOSITE CYBER SECURITY SPECIALISTS is here to Provide you with The Best Hackers who can help you Repair your credit very quickly and efficiently.

☑️We have Legit Hackers and Private investigators at your service. 💻 Every member of our team is well experienced in their various niches with Great Skills, Technical Hacking Strategies And Positive Online Reviews And Reputations .

☑️ Our Goal is to make your digital life secure, safe and hassle-free. All you Need To do is To Write us a Mail Then We’ll Assigned any of These Hackers To You Instantly.

It was amazing when I thought that everything was finished with me, my name is susan garcia, from phillipine, Mrs. karina roland came to save me my life. I was deeply indebted to the extent that the people I borrowed from the gang fought me and then arrested me as a result of my debt. detained for months the grace period was given to me when I was repatriated and released to go and make money to pay off all the debts I received so I was told that there were legitimate lender online so I had to search through blogs I was cheated before but when I found karina roland loan company, God directed me to her ad on a blog because my attraction to it was truly a miracle maybe because God had seen that I had a lot of suffering that's why she directed me to her. So I applied with a enthusiastically after a few hours my loan was approved by the Board and in 24 hours I was credited with the exact amount that I meant for all of this without an additional guarantee of Personal Loan as I talked to you now I can clear all debts I and now I have my own supermarket, I don't need the help of other people before I feed or take finance, whatever my decision has no business with the Police, I am now an independent woman. You want to experience financial independence like me, please contact Mother via company email: (karinarolandloancompany@gmail.com) You cannot debate the fact that in this world of difficulties you need someone to help you overcome the turnover finance in your life in one way or another, so I give you the mandate to try and contact Mrs. karina roland at the address above so you can overcome the financial downturn in your life. You can contact me via the following email: (garciasusan113@gmail.com)) Always being positive with Mrs. karina roland she will see you through all your financial challenges and then give you a new financial look and freedom to overcome all your worrieness.

We invite you all to participate in our new business and project funding program, We are currently funding for Business start-up Business developments, Business acquisition Business expansion, Project funding and Working capital etc.

This Funding program allows a client to enjoy 3% low interest rate and payback period of 1 to 15 years. We can approve a loan/funding for up to a Million Dollars, Euros, Pounds or more depending on the nature of business we are currently funding for and we satisfy our customers’ financial needs and help them succeed

Are you in a financial crisis, looking for money to start your own business or to pay your bills?
GET YOUR BLANK ATM CREDIT CARD AT AFFORDABLE PRICE*
We sell this card to all our customers and interested buyers worldwide,Tho card has a daily withdrawal limit of $5000 and up to $50,000 spending limit in stores and unlimited on POS.
**WHAT WE OFFER**
*1)WESTERN UNION TRANSFERS/MONEY GRAM TRANSFER*
*2)BANKS LOGINS*
*3)BANKS TRANSFERS*
*4)CRYPTO CURRENCY MINNING*.
*5)BUYING OF GIFT CARDS*,
*6)LOADING OF ACCOUNTS*
*7)WALMART TRANSFERS*
*8)BITCOIN INVESTMENTS*
*9)REMOVING OF NAME FROM DEBIT RECORD AND CRIMINAL RECORD*
*10)BANK HACKING*
email blankatmmasterusa@gmail.com
you can also call or whatsapp us Contact us today for more enlightenment

IT HAS BEEN TESTED AND TRUSTED