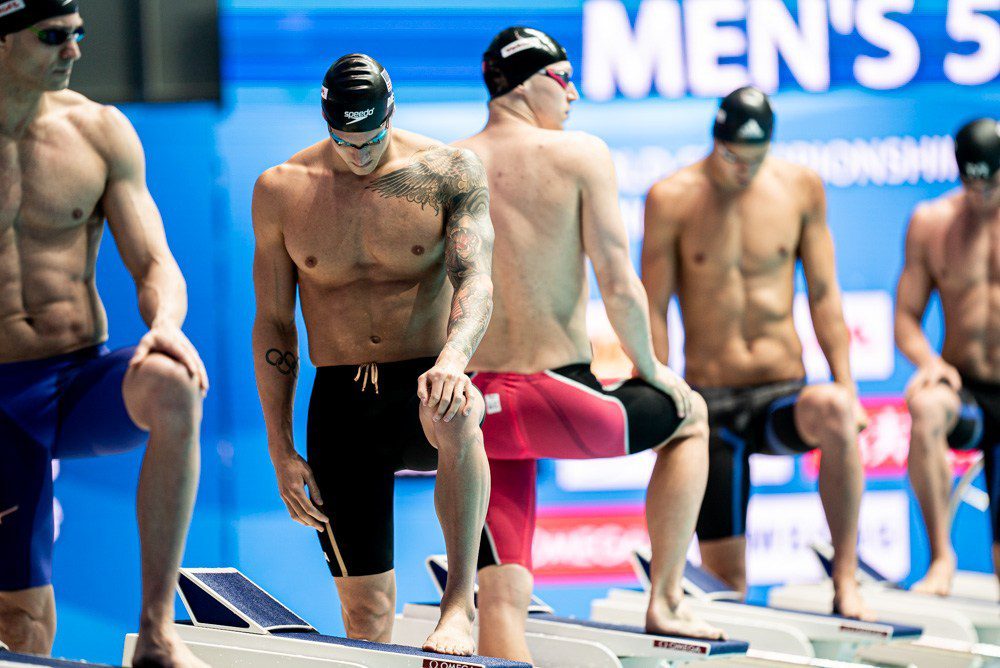 Caeleb Dressel claimed his second gold of the championships with a roaring 22.35 American and Championship record that dominated the butterfly dash, Oleg Kostin, of Russia, taking silver in 22.70 and Brazilian veteran Nicholas Santos the bronze in 22.79, American Michael Andrew locked out by 0.01sec.

Britain’s defending champion Ben Proud was off his best in the rounds but was first off his blocks over on the wing in 1. His reaction of 0.57sec compared to Dressel’s 0.62 but the American rolled like thunder into his stroke and never let up all the way to the second-fastest time in history.

The 22.27 world record of Ukraine’s Andrey Govorov lived to fight another day but Govorov was back in sixth on 22.91 today, while another former world champion, Proud finished seventh in 23.01.

Dressel, a member of the victorious USA 4x100m freestyle quartet yesterday, collected a world-championship record seven gold medals two years ago in Budapest and is on course to keep his tally golden.

He said: “Two years ago I was fourth so I looked up and was surprised. I knew it was going to be a fast heat. It certainly was so I was a bit surprised. I thought my semifinal swim…I didn’t think I was going to get much faster than that to be honest and I did so I was happy to improve on that.

“Of course you have those self-doubts pop into your mind every now and then but it’s nice to overcome them. It’s kind of just an individual success I feel like that I do with myself to just kind of shut those things out and just race, that’s what you’ve gotta do at the end of the day.”

Dressel became the first American to take the 50 fly crown, something he had been unaware of until told by two reporters.

It’s good, he said. “I am glad to be a part of it. I don’t think it is something we were too worried about. The 50 strokes are a little weird in the US, it’s not particularly something of importance, we don’t really do them that much. We are starting to do them more and more but it’s not really a thing. I guess it’s good we got one guy in there, I’m glad it was me.”

He added: “It shakes it up. It’s just a fun event, that’s what I was telling the guys after the race that it was a fun one. It really was. They’re all supposed to be like that but the 50 fly for me, it just brings something different. It’s a lot less…stress is not the right word but it’s the only thing I can think of that comes to mind. It’s just good old- fashioned racing in an event that is just as Worlds so it seems to just not have that same pressure on it.”

Santos claimed his third medal, 18 years after making his World Championship bow in Fukuoka, Japan, in 2001.

It was unexpected given the 39-year-old had not been selected by Brazil but instead was invited by FINA after he set a new South American record of 22.6 in the FINA Champions Series in Budapest, Hungary.

He said: “It’s amazing for me. My third medal in the long-course world championships so I am pretty happy. Especially because FINA invited me to be here – not my federation, my country – so I am 39-years-old and I won a medal, it’s amazing.

“I am very focused, I take care of my body, my nutrition, genetics – that’s not my control – but I do the hard work.”

Of who he was thinking of on the podium, he said: “I think I was doing it for me, my family and my sponsors that support me and are with me and it is good for Brazil as well and I hope to help the others from Brazil to get the other medals here.