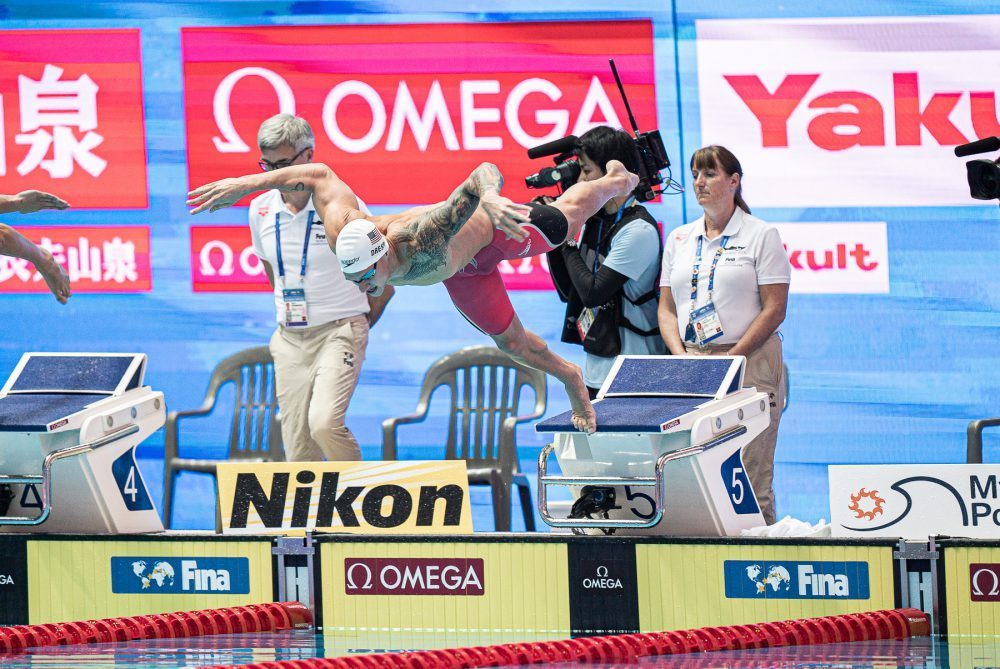 After the first two semifinals of the evening at the World Swimming Championships produced world records in the men’s 100 fly and women’s 200 back, action came back to Earth just a smidge with action in the men’s 50 free and women’s 50 fly.

Caeleb Dressel had just 30 minutes to recover after setting a world record in the men’s 100 fly, but he quickly got back in the pool and led the way in the 50 free semifinals with a 21.19, just four hundredths short of his lifetime best of 21.15 that he swam on his way to a world title in the event two years ago in Budapest. Only three men, Cesar Cielo, Fred Bousquet and Ben Proud have been quicker, with only Proud having done so (21.11) in textile.

Dressel will reverse the order of his two events in finals, with the 50 free proceeding the 100 fly. Two years ago, Dressel became the first man to win world titles in three separate events in one night, with the mixed 4×100 free relay at the end of the session. Dressel should have the opportunity to go for gold in all three again Saturday.

In the short turnaround he had between his two races, Dressel was allowed to use the diving well to cool down.

Finishing well behind Dressel, Brazil’s Bruno Fratus (21.53) and Great Britain’s Proud (21.56) qualified second and third, respectively. The rest of the field finished in a tight pack between 21.60 and 21.77, with the group led by Greece’s Kristian Gkolomeev (21.60) and completed by the USA’s Michael Andrew (21.77).

Sarah Sjostrom also had to handle multiple races in the Friday evening session, as she returned for the women’s 50 fly semis just over an hour after winning bronze in the 100 free. While Sjostrom couldn’t defend her 100 free world record, she should have no trouble dealing with the field in the 50 fly, as she now holds the 15 quickest performances in history in the event. Her 24.79 from the semis is the fifth-fastest mark ever, while no other woman has ever cracked 25.

The Netherlands’ Ranomi Kromowidjojo, the silver medalist in the event two years ago in Budapest, qualified second in 25.54, followed closely by France’s Marie Wattell (25.56) and the USA’s Kelsi Dahlia (25.59). Egypt’s Farida Osman, the Budapest bronze medalist, qualified fifth in 25.79.