Chinese Diver, Li Ting, To Be Inducted Into the International Swimming Hall of Fame

At just seven years old, Li Ting’s emerging diving talent caught the eye of Chinese diving coaches.  She, along with her twin sister, Li Rao, were sent for formal training and eventually joined the Chinese National Team.  Li Ting continued on with a successful career in diving which included a trip to the Athens Olympic Games at just 17 years old in her specialty event the synchronized 10-meter platform, the London Olympic Games, two World University Games, and many other World Championships and elite international competitions.  Li Ting will be inducted into the International Swimming Hall of Fame as a member of the Class of 2019 during the Honoree Induction ceremony in Fort Lauderdale, Florida, May 18, 2019.

When they were just little girls, Li Ting and her twin sister, Li Rao, fell in love with diving by watching their older sister, Li Yaun.  Every day after school, they would rush to the outdoor pool in their hometown of Lingui to play and  Li Yaun train.  Eventually, all three sisters trained at the pool in Lingui, receiving basic diving training from Coach Tang Gengsheng.

The seven-year old twins had a special diving talent though which brought them recognition early on.  They were chosen for their athletic abilities and sent for formal training, along with their regular education, to the Guilin Diving School to be trained by Coach Zeng Yong and Coach Qin Jing.  They became members of the provincial squad in 1995. 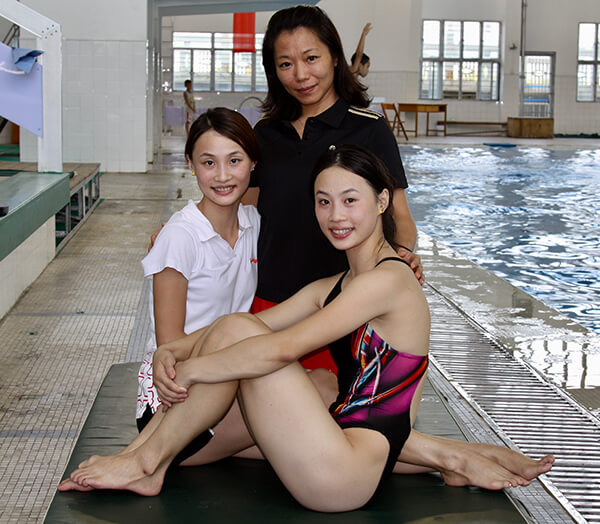 ISHOF Honoree, Zhou Jihong, Director of the National Team in China, recognized the potential of the sisters and in 1999, they were selected as members of the Chinese National Diving Team.  When they first arrived to train with the national team, they were star-struck.  They were in the presence of and would be training with, the greatest divers in the world.  Divers that they had only seen on television.  Divers like Xiong Ni, Sun Shuwei and Fu Mingxia, all future Hall of Famers.  It was very exciting for the sisters, yet also overwhelming, they were in a strange place, far from home.

The new training was extremely difficult and intense.  Li Ting and Li Rau were still young, and there was a tremendous amount of pressure put on them. They were expected to perform at the highest levels.  It was a demanding atmosphere and the girls felt a great deal of stress and knew perfection was expected.  Yet, the girls thrived. They improved tremendously and with the many different aspects of training, and with the top coaches in the country, they learned many new dives and difficult moves.

Li Ting, partnered with her twin sister, Li Rao, in the Ninth Annual Chinese National Championships, won the bronze medal on the 10-meter platform in the synchronized diving event. 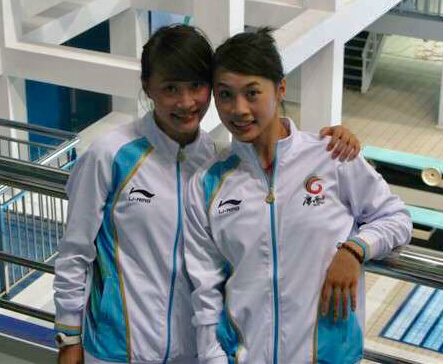 In 2001, the twin sisters went abroad for the very first time to compete in Germany, Russia and the United Kingdom.  They took gold in the women’s synchronized 10-meter platform in all three stops of the competition.  In addition to the synchronized events, Li Ting came away with three more gold medals, winning all the individual events on all three stops, all on the 10-meter tower, in the individual event.

In 2003, Li Ting was paired with new partner, Lao Lishi.  The new pair went on to win the 10th FINA World Championships (Barcelona) on the 10-meter platform in the synchronized event.  The same year, Li Ting was selected for the 2004 Olympic Team, at the age of just 17 years old. 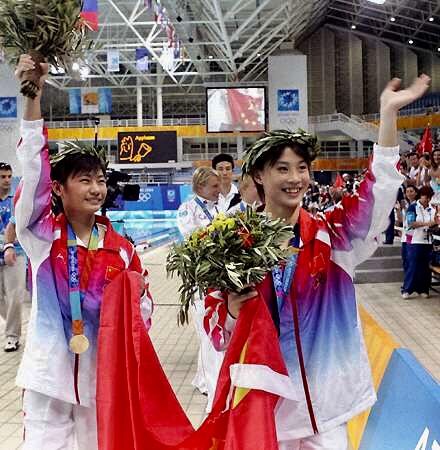 For Li Ting’s first experience on the Olympic stage, she certainly did not disappoint.  She and Lao Lishi won the women’s synchronized event on the 10-meter platform, her signature event.  They also won the 14th FINA World Cup (Athens) earlier in the year.

After the Athens Olympic Games, in 2005, the coaches decided it was time for Li Ting to expand her diving and transition to springboard diving, now that she had mastered the tower.  It was a hard transition for Li but she mastered it successfully, as she did most challenges.

Li Ting competed for the first time as a synchronized 3-meter springboard diver at the FINA Diving Grand Prix in Canada and took gold.  She went on  the FINA World Championships in the same event.  Later in the year, Li participated in the 23rd World University Games, where she came away with three gold medals, the first in the 10-meter individual event, and the next two in the 3- and the 10-meter synchronized events. 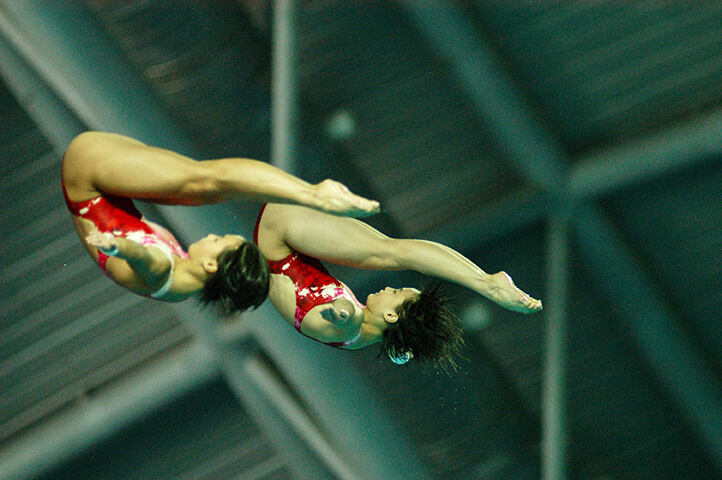 In 2006, Li Ting won the 3-meter synchronized event at the 15th Asian Games and went on to win the same event with ISHOF Hall of Famer Guo JingJing at the 15th FINA Diving Grand Prix.  Later in the year, while Li Ting was practicing for the FINA World Cup, she noticed that she had a small pain in her leg and she tried to ignore it.  It turned out to be a fatigue fracture caused by long term use from her many hours of training.  Being the true competitor that she is, Li Ting fought through the pain, continued the competition and won the 3-meter synchro competition with teammate, Guo Jingjing, in their  country of China, in Changshu.

2007 saw Li Ting continue to win on the 3-meter springboard in the synchro event in every meet she entered, but this time she had a new partner, He Zi.  They took gold in the 24th University Games (Bangkok), and the FINA World Diving Grand Prix. 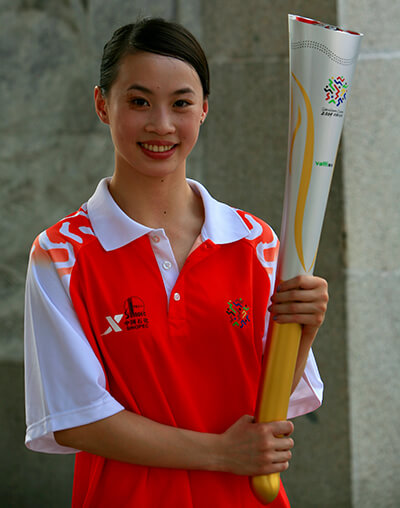 The year is now 2008, and the city of Beijing was preparing to host the long-awaited Olympic Games. All Chinese people were proud to showcase their city and country.  Chinese  were especially excited to compete in their own country and have the crowd be their own fans.  Li Ting was 21 years old, was at the top of her game and should have been more thrilled than anyone.  Unfortunately, that was not the case.

The pain from her leg continued to get worse and sadly kept her out of the 2008 Olympic Games.  She eventually had surgery but her leg was slow to heal.  Li Ting knew she had to make a difficult decision and end her career.

She set new goals for herself, deciding to go to university even thought she knew it would be hard switch from physical activity to studying.  She would just have to consider reading, an Olympic event!  So, she went back to school and in 2012, Li Ting graduated from China Renmin University, an elite research university in Beijing with a Bachelor’s degree.  She continued on to graduate school, and received her degree from the Beijing Sports University, where she studied humanities, sociology and sports management.  After she completed her , Li Ting went to the University of Minnesota as a visiting scholar for nine months in 2014-2015, which was fully funded by the National Scholarship Fund.

After Li Ting’s time in Minnesota, she returned to her hometown province of Guangxi, as the deputy director of the Aquatic Center of Guangxi. In 2018, Li Ting joined her fellow former teammates, Wu Minxia and others, and became an international FINA referee for diving. In addition to staying involved in the diving community, Li Ting is involved in social welfare activities.