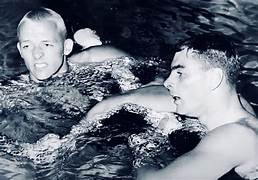 On this day, August 27, in 1960, the Olympic Games were taking place in Rome, Italy.  Australian swimmer John Devitt controversially won the 100m freestyle gold medal while American Lance Larson, recorded the same time 55.2 but was awarded the silver medal.

Back in 1960, results were decided by finish judges who relied on their eyes and did not use replays. Three judges were assigned to each finishing position. There were three official timers in 1960 for each lane and swimmer, all timing was by hand. All three timers for Devitt, who was in lane three, timed him in 55.2 seconds. The three timers for lane four timed Lance Larson in 55.0, 55.1, and 55.1 seconds.

FINA co-founder Max Ritter inspected the judge’s scorecards. Two of the three first-place judges believed that Devitt had finished first and the third voted for Larson. Of the three-second-place judges, two found that Devitt finished in second place and the third found that Larson was second. Ritter explained to chief judge Runströmer (Sweden) that the results proved a tie. Runstrümer made the final decision and declared Devitt the winner. However, at the time, the rules did not provide the chief judge to have a vote or allow him to break ties.  That job was supposed to be broken by referring back to the timing machine. So, the official results gave Devitt the gold and Larson silver, both with the identical time of 55.2 seconds.  The USA appealed, providing videotaped footage of the finish which they believed showed Larson the winner.   Headed by Jan de Vries,  President of FINA in 1960, the appeal jury rejected it, Devitt remaining the winner.

This controversy made way for the need for electronic touchpads to be included in swimming events to determine finish and accurate timing.  And thanks to the hard work of our 2020 ISHOF Honor Contributor, Peter Hurzeler, it soon became a reality.