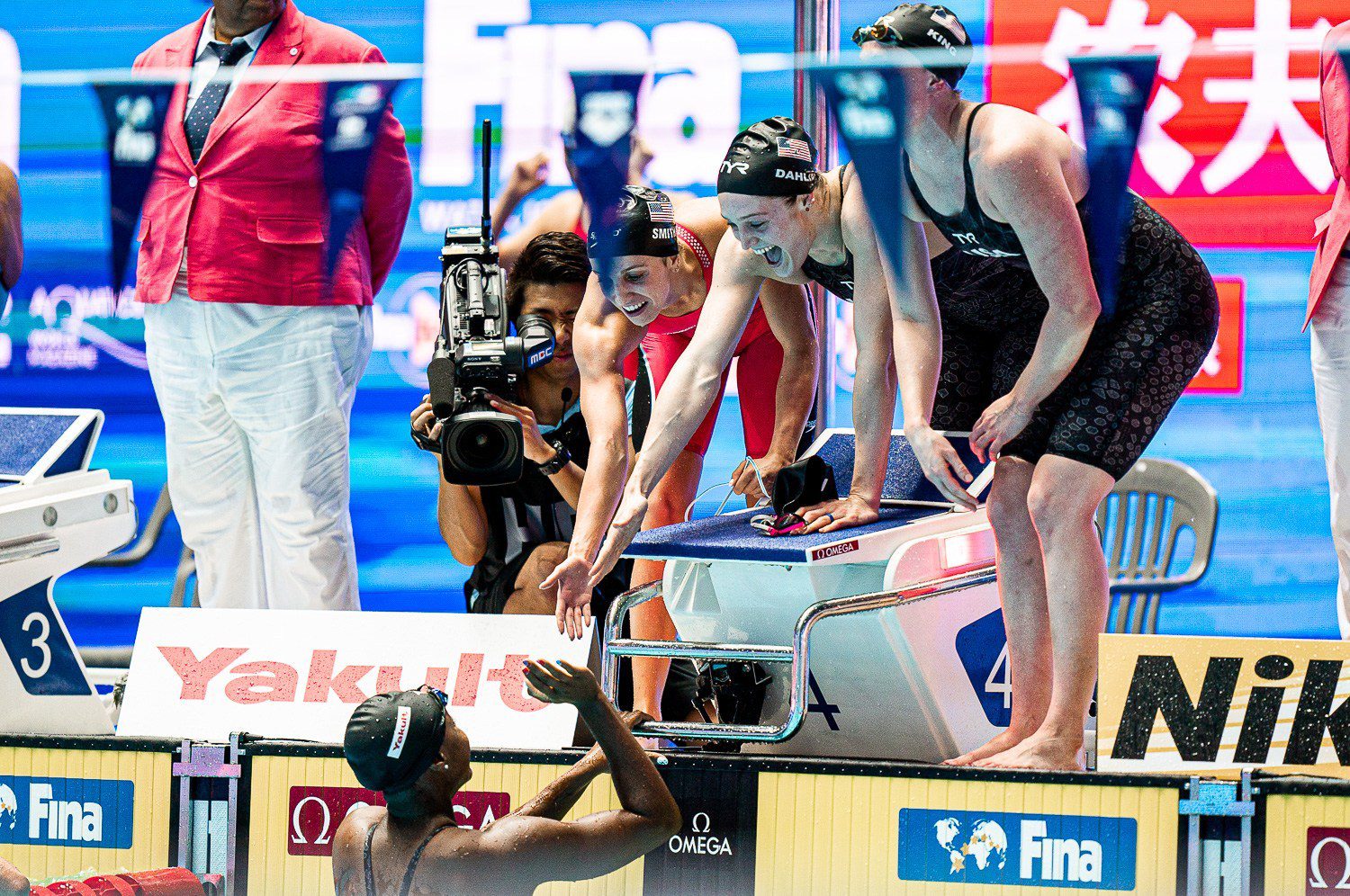 In a little less than four minutes, the United States produced a pair of world records in the 400 medley relay to punctuate the World Championships in the grandest of fashions. Not only did the American squad crack the world record in the relay, thanks to a time of 3:50.40, teenage phenom Regan Smith notched her second global standard of the week with a backstroke leadoff of – get this – 57.57.

After Smith obliterated the world mark of 58.00 to jumpstart the United States, Lilly King, Kelsi Dahlia and Simone Manuel flourished on their legs to help Team USA lop more than a second off the previous world record of 3:51.55. King on breaststroke (1:04.81) and Manuel on freestyle (51.86) produced the fastest splits on their legs while Dahlia (56.16) had the second-fastest butterfly leg.

When Smith blasted the world record in semifinals of the 200 backstroke, chatter immediately started about the possibility of the 17-year-old handling the leadoff leg of the medley relay. Ultimately, that was the decision made by the American coaching staff, who felt the hot hand of Smith couldn’t be ignored.

Surging right from the start, Smith nearly led by a second by the backstroke turn and continued to pour on the speed down the final length to wipe .43 off Kathleen Baker’s world record from last summer. More, Smith’s outing left no doubt about a United States golden finish, as the Stars & Stripes participated in more of a coronation than a battle with Australia, which edged the U.S. in the first two women’s relays of the week.

The Aussies easily claimed the silver medal as Minna Atherton, Jessica Hanson, Emma McKeon and Cate Campbell touched in 3:53.42. Canada, buoyed by Maggie MacNeil’s fly leg of 55.56, picked up the bronze medal, with Italy well back in fourth in 3:56.50.

While the American men (Caeleb Dressel excluded) were not sharp in Gwangju, the U.S. women were strong throughout the eight-day meet, Smith and Manuel emerging as the team’s stars. For Smith, any remaining anonymity has evaporated and her profile will undoubtedly become tied to the hype attached to the 2020 Olympic Games in Tokyo. Not only will Smith be the favorite for gold in both backstroke events heading into the Olympic year, her wide-ranging skill set is geared toward the adoption of a heavy program for the U.S. Olympic Trials in Omaha. Smith, too, is a world-class performer in the butterfly events, and could also provide a boost to the 800 freestyle relay.

Smith’s backstroke performance is difficult to comprehend, as it sits nearly a half-second faster than the previous world mark and .53 ahead of the personal best by 100 backstroke world champion Kylie Masse of Canada. Her world record of 57.57 traveled at the rate of what East German legend Roland Matthes managed for the male world record in 1969.

“After what I did in the 200 back, I was feeling really confident and really excited, and I had a really good feeling going in,” Smith said. “I was super, super happy when I finished.”

Heading into her senior year at Lakeville North High School in Minnesota, Smith went into Worlds viewed as a contender for gold in the 200 backstroke. But the moment she stopped the clock in 2:03.35 in the semifinals of that event, in the process erasing Missy Franklin’s 2012 world record, everything changed. She was no longer a contender for gold, but instantly became one of the sport’s highest-profile athletes. Yes, things can change that quickly.

Upon returning from the World Championships, Smith is expected to compete at the United States National Championships at Stanford University. If she stays true to her plan, Smith will have the opportunity to contest additional events while in peak form. Of course, she’ll have to deal with the impact of travel and the time-zone difference between Korea and California. Obviously, Smith will be a major attraction.

On the flip side of Smith, Manuel was a known commodity when the week began, but the veteran sprinter turned in the best meet of her career in Gwangju. Strengthening her identity as one of the most clutch performers in the sport, Manuel opened her night by winning gold in the 50 freestyle, in the process edging heavyweights Sarah Sjostrom and Cate Campbell. The victory marked the fourth time since 2016 in which Manuel claimed a global title in a sprint event after not entering the final as the favorite. She previously pulled off the feat in the 100 freestyle at the Rio Olympics and at the 2017 and 2019 World Champs.

In addition to winning each of her individual events, Manuel added gold in the mixed 400 freestyle relay and claimed three silver medals in relay action. Manuel’s hardware haul made her the first female athlete to win seven medals at a single World Championships. Despite the record-breaking performance, Manuel was clipped for Swimmer of the Meet honors by Sjostrom, who won five solo medals. The Swede raised her career total of World Championships medals to 16.

“When I touched the wall, I didn’t know we broke the world record,” Manuel said. “I really didn’t hear anything. I turned around, and I had to squint (at the scoreboard). To start it off with a world record from Regan really pumped us all up. We definitely wanted to finish off the meet on a good note. I think we’re really happy with that swim.”

After Smith handed Team USA a 1.49-second advantage on backstroke, King extended the United States’ lead at the halfway point of the race to 2.76 seconds. Dahlia and Manuel took care of matters the rest of the way, giving the Americans their 14th gold medal of the competition. The U.S. finished with 27 medals.

bell used the meet as preparation for the next Olympiad.

“I’ve been pleased with all of my performances,” Campbell said. “To get a podium on both of my individuals and have some really good relay swims shows that I’m in a really strong place. My focus was always kind of on next year. We had a little bit of an upheaval earlier in the year moving to Sydney and I probably had a bit more time off at the end of last year than I would usually, so I’m really encouraged by the swims I’ve managed to put together and it’s good to be racing an eight-day program again.”