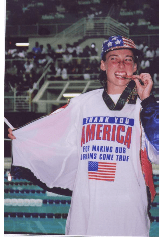 Amy Van Dyken set the world on fire when she qualified in five events for the 1996 Atlanta Olympic Games and won an unpredicted four gold medals – 50 free, 100 fly and both relays, the most ever by an American woman at one Olympic Games and a feat achieved only two other times in women’s Olympic swimming history.

An asthmatic since childhood limiting her to about 65% of normal lung capacity, she was advised by her doctors to take up swimming. A slow starter, it took her a few years to finish one length of the pool. But after winning a race, she was hooked. As she matured, she became a Spartan, no-nonsense competitor who tried to psych out her opponents with pre-race claps, growls and stares. After her stellar Atlanta Olympic performance, she won three gold medals at the 1998 Perth World Championship and another two more Olympic gold medals at the 2000 Sydney Games as a member of the 4 x 100 meter freestyle and medley relays giving her a total of six career Olympic gold medals.

Amy competed in the 1995 Pan American and Pan Pacific Games winning four gold and three silver medals in freestyle and butterfly events. She was the NCAA Female Swimmer of the Year at Colorado State University in 1994 and then trained with US National Team coach, Jonty Skinner. At 6’0” and 145 pounds, Amy is one of the world’s great freestyle and butterfly sprinters who held the World Record in the 50m butterfly – short course. She was the 1996 U.S.O.C Female Athlete of the Year and the Associated Press Worldwide Female Athlete of the Year. She is seen on the Wheaties cereal box, Got Milk ad and TV and radio programming along with husband Tom Rouen, NFL punter who has won two Super Bowl rings with the Denver Broncos.