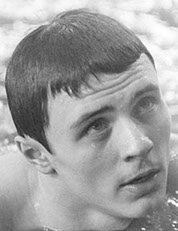 The small, European country of Hungary is noted for producing the world’s great individual medley swimmers including Olympic champions, Tamas Darnyi and Attila Czsne. But it all began with a young 16 year old swimmer, who in 1972 won the Olympic bronze medal in the 400 IM in Munich, less than one second behind Gunnar Larson of Sweden and Tim McKee of the US who finished with identical times. Under the coaching guidance of Tamas Szechy, Andras Hargitay was on his way to become the great IM swimmer of the 1970’s.