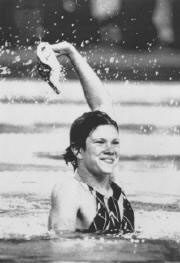 Born in Melbourne, Victoria, in 1962, Tracey began swimming at age eight and broke her first State age group record in the 200-meter backstroke at age 10.  Her first National gold medal came in the 200-meter individual medley at age 12, but it was the middle and distance freestyles which were to be Tracey’s strong events.  By age 13, she had made the 1976 Australian Olympic team as the youngest competitor on the team.

Tracy dominated the middle distance freestyle event for women in the years preceding the 1980 Moscow Olympics.

Tracey was selected for the 1980 Australian Olympic team but pulled out for personal and family reasons.  She retired, but came back eight months later to win gold medals in the 100-meter butterfly and 200-meter freestyle at the Australian National Championships.  Her coach, Laurie Lawrence, was her inspiration to continue training for the 1982 Commonwealth Championships in her hometown of Brisbane where she repeated her 400-meter and 800-meter freestyle victories from four years earlier and took the silver in the 200-meter freestyle.