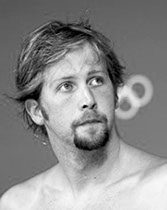 When 17-year old Ian Crocker entered the 2000 US Olympic Trials, it was with a view to gain experience for 2004, but he left the meet winning the 100m butterfly. Then, at the Olympic Games in Sydney, he won a gold medal as a member of the USA’s world record breaking 4x100m medley relay team.

After graduating from high school, he left Maine to swim for Eddie Reese at the University of Texas and won the NCAA title in the 100yd butterfly as a freshman. He was America’s top flyer and won a silver medal at the 2001 FINA World Championships. At the 2002 Phillips Nationals in Fort Lauderdale, 17-year old Michael Phelps rallied in the final yards to beat him and claim his American record of the 100m butterfly. Thus began an incredible rivalry that would last through the Beijing Olympic Games.

At the 2003 FINA World Championships, Crocker won the 100m butterfly, beating Phelps and becoming the first in history to break 51 seconds. He beat Phelps and bettered his world record again at the 2004 Olympic Trials while also finishing second behind Jason Lezak in the 100m freestyle.

Before their race in Athens, it was clear that Ian had not been feeling well or swimming well. In fact, he arrived at the Olympic village with a sore throat. He performed poorly in the 100m freestyle and freestyle relay and as he was starting to feel better, Phelps took the gold with a brilliant touch at the wall to beat him in the 100m butterfly, which knocked him off the relay, one that he had been a part of since 2000. In a magnanimous gesture of grace and sportsmanship, Michael Phelps gave his medley spot to Crocker. “He wasn’t feeling too well,” said Phelps. “He deserved another shot.” The gesture brought Crocker to near tears and he didn’t disappoint, splitting a world best time of 50.28 seconds, to help his team win gold and set a new world record.

In 2005, Phelps had backed off a bit on training, while Crocker was wholly focused on the FINA World Championships. In the much anticipated rematch, Crocker took the lead and never looked back, finishing a full body length ahead of the field and breaking his world record by more than three tenths of a second.

At the 2008 Beijing Olmpic Games, despite not earning a medal in his signature event, Crocker swam in the prelims of the USA’s 4×100m medley relay and received his third Olympic relay gold medal.

Ian Crocker retired after the Beijing Games with 21 medals in major international competition, spanning three Olympics and four FINA World Championships. He is one of the only swimmers in history to win the same event – the 100yd butterfly – all four years of college. History will remember him as one of the greatest butterflyers, a man who held onto the 100m butterfly world record for six years.