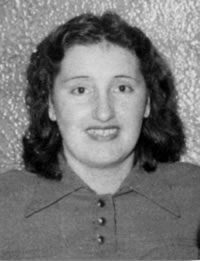 For a 20 year period, Dutch backstroke swimmers held all the World backstroke records with Rie Mastenbroek, Nina Senff, Cor Kint and Iet van Feggelen in the 1930’s, 1940’s, and 1950’s. Van Feggelen reached her swimming prime following the Olympic Games of 1936. In 1938 and 1939, she set eight World Backstroke Records in distances from 100 yards to 400 meters.

Her Olympic ambitions were denied when World War II prevented her from competing in the cancelled Games of 1940. There were no Olympic Games in 1944; but she kept swimming and almost ten years later, following the war, she swam on Holland’s 3 x 100 medley relay teams setting three world records in the process.

In 1947, she toured the USA with Hall of Fame teammate Nel van Vliet, during which time she discovered synchronized swimming. Upon her return home, she started the first synchronized swimming team in Holland and Europe. Holland’s Jan Armbrust followed Iet’s Dutch synchro success with his own team a few years later eventually becoming very active in the international synchronized swimming scene. During this time, Iet’s brother Rudy was playing water polo on the Dutch National Team and won the bronze medal at the 1948 London Olympic Games.

The Dutch Swimming Federation selected her as a coach for the Olympic swimming teams of 1964 and 1968.