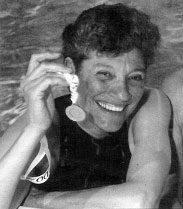 Jane Asher was born in ‘Nkana, Northern Rhodesia in 1931, but grew up in South Africa, loving the water and having swimming access anytime, anywhere. At the age of 22, in 1953, she moved to Britain to take a post-graduate diploma in personnel management at Manchester University. She swam on the university swim team and realized the swimming advantage she had had as a child living in South Africa. The children of Britain did not have the same access to water privileges Jane had, as during World War II and shortly before her arrival, Britain’s beaches were covered with barbed wire, and pool swimming time was at a premium. Jane started to work as a teacher and coach of school children in her area, beginning with the very basics of the sport.

By 1980, she had set up her own private team. While parents waited for their children during training sessions, Jane thought they could spend their time better in the water than on poolside. Thus began the nucleus of the first Masters swim club of the Amateur Swimming Association (A.S.A.) of Great Britain.

Jane became the catalyst and organized the setting up of the East Anglian Swallow Tail (E.A.S.T.) Club for Masters. Many of the swimmers not only were coached by Jane in this new club, they had been coached by her years before in high school.

In 1992, she and a few E.A.S.T. members successfully ran a seminar specifically for Masters. She started a training camp in the French Alps, maybe the first for Masters at high altitude.

Since 1986, as a world-class Masters swimmer, she has set 75 FINA Masters World Records in the freestyle, I.M., backstroke and sprint butterfly events in the 55-59 through 70-74 age groups. She has won gold medals 30 times at FINA Masters World Championships, 36 at Masters European Championships, 6 at Masters Pan Pacifics, and 95 at British Masters National Championships. She has set 76 Masters European Championship records and 117 British Masters national records. She has gold medals at the National Championships of Britain, Scotland, Wales, France, and Holland. When she turned 70 in 2001, she traveled Britain and Europe to try to swim every long and short course event available. The results – she broke all the British records and a whole lot of World and European records too. Even after total hip replacement in 2002, her times continue to drop.