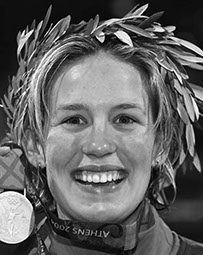 Growing up on the beautiful beaches of Queensland, Australia, Jodie Henry spent a lot of time at the beach with her two sisters, thanks to her parents love for the water. She learned to swim at the early age of three at the local Brisbane Swim School, but didn’t start competing until she was a teenager, which is quite late for a future Olympic Champion in this era.

Jodie made her first appearance on the international stage at the Commonwealth Youth Games of 2000, held in Edinburgh, Scotland. She proudly represented Australia by bringing home five gold medals. At the 2002 Manchester Commonwealth Games, she won the Women’s 100 meter freestyle, took silver in the 50 meter freestyle as well as being a member of the gold medal winning relay team. Later that same year, Henry competed at the Pan Pacific Championships and helped Australia take gold from the United States in the freestyle and medley relays.

The Games of the XXVIII Olympiad, held in Athens, Greece, proved to be the pinnacle of Jodie Henry’s career. For her first medal winning performance, she anchored the Australian Women’s 4 x 100 meter freestyle relay team that won gold in world record time of 3:35.94. In the semi-finals of the individual 100 meter freestyle event, she broke teammate Libby Lenton’s world record with a time of 53.32, and went on to win the gold medal – the first to do so since Hall of Famer Dawn Fraser did it 40 years earlier. She picked up her third gold medal anchoring the 4 x 100 meter medley relay in another world record time.

In November of 2004, Jodie Henry was named the Australian Swimmer of the Year, becoming just the third woman in 15 years to take the honor, breaking Ian Thorpe’s five-year streak of receiving the award. She also was awarded the Order of Australia Medal.

After the 2004 Olympic Games, Henry followed her one and only coach, Shannon Rollason, to the Australian Institute of Sport, in Canberra, as she looked ahead to the Games in Beijing. At the 2005 World Championships in Montreal, she won the gold medal in the 100 meters with a time of 54.18. That came on top of her leadoff role in Australia’s victorious 4 x 100 meter freestyle relay team and second relay gold as a heat swimmer in the 4 x 100 meter medley relay. At the 2007 World Aquatic Championships in Melbourne, Henry anchored the Australian 4 x 100 freestyle relay team in world championship record time of 3:35.48 to win gold, again ahead of the USA.

A combination of health and motivational issues derailed her hopes for the 2008 Olympic Games and she announced her retirement from swimming in 2009, at the age of 25. Today, Jodie Henry lives in Brisbane with her husband, Tim Notting, a now retired Australian football star, and their three children.