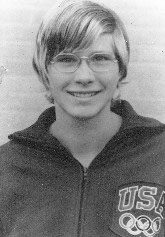 Miss Belote came from nowhere in the 1972 Olympic Trials to beat the reigning queen of the American Backstroke, Susie Atwood.  In Munich they again finished one, two, as Melissa set a World and Olympic Record to win the 200m Back.  Nominated twice for the Sullivan Award, in 1972 & 1973, she again made the team for the 1976 Montreal Games.

During the 1976-77 season, Melissa finished first in College All-American ratings for the 200yd & 400yd I.M., and the 200yd Back.  For this season she also won the AIAW & Broderick Awards as “Outstanding Female College Swimmer.”  Melissa retired in 1979 and was inducted into the Arizona State University Hall of Fame in 1981.  Following the retirement of her longtime mentor, Ed Solotar, she is now co-coach of the Solotar Swim Team.