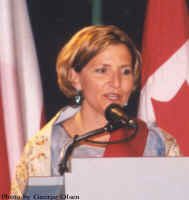 Michelle’s success was by virtue of her exacting technical skill. Her and teammate Helen’s 1978 combined figures scores were 87.30, a full 2.70 points above the duet silver medalists. She performed creatively and with intensely dramatic routines. Michelle, with partner Helen, instigated the great success of their home club in Calgary culminating ten years later in another goal medal duet win, this time by Carolyn Waldo and Michelle Cameron at the 1988 Olympic Games.

Michelle’s passion for synchronized swimming never diminished and she is now the head coach of her Aquabelles as well as serving as a Canadian National Team coach since 1988. She was the 1996 Canadian Olympic coach when Canada won the silver medal in the team event.