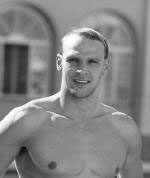 In a country noted for its male individual medley and breaststroke swimmers, Norbert Rozsa was a standout. He won gold medals in each of European Championships, World Championships and Olympic Games.

Norbert was born on February 9, 1972, in Dombovar, Hungary, only a month after John Hencken (USA) won the 200m breaststroke at the Munich Olympics. Little did Rozsa know that in 1996, twenty-four years later, he would be swimming in the same Olympic event in Atlanta and winning the gold medal.

Rozsa started swimming at age eight with Coach Andrea Kecskes and continued with her for six years until, at age fifteen in 1997, began swimming with Hungary’s great individual medley and breaststroke coach, Tamas Szechy. Hall of Famer Tamas Darnyi had been having great success with Szechy when in 1986 he won both the 200m I.M. and 400m I.M. at the Madrid World Championships. Darnyi had also won the same two events at the 1985 and 1987 European Championships. Rozsa wanted to win on the international level, too. He stayed with Coach Szechy for the remainder of his swimming career even though he spent a year (1998-1999) with breaststroke Coach Jozsef Nagy, the Hungarian breaststroke coach living in the United States.

With three years of training, Rozsa entered his first major international competition at the 1991 World Championships in Perth, Australia. Astoundingly, he won the gold medal in the 100m breaststroke beating the current world record holder Adrian Moorehouse (GBR). He tied Moorehouse’s world record in the preliminary heats (1:01.49) and claimed the record again in the finals with a time of 1:01.45.

At the European Championships in Athens later that year, Norbert again beat Adrian Moorehouse in the 100 meter breaststroke to win the gold medal in a close race. In the 200m breaststroke, he lost by only .03 seconds to the former World Record holder Nick Gillingham of Great Britain. With this as a continued confidence builder, Norbert went to Barcelona the next year to compete in the 1992 Olympics winning the silver medal in the 100m and 200m breaststroke events. In the 200m race, Mike Barrowman won the event in world record time, but in winning the silver medal Rozsa had now beat Gillingham, the bronze medalist by .06 seconds. In the 100 meter race, Norbert was only .18 seconds behind gold medalist Nelson Diebel of the USA.

Only 20 years old at the Barcelona Olympics, Norbert decided that he would continue training for the 1996 Atlanta Olympics in hopes to win an Olympic gold medal. He elected not to swim in the 1993 European Championships of Sheffield but in 1994 at the Rome World Championship, he swept the breaststroke events, winning gold medals in both the 100m and 200m breaststroke, just edging out teammate Karoly Guttler in the 100m breaststroke and Eric Wunderlich (USA) in the 200m breaststroke. As a member of the 4×100 medley, his country took the bronze medal behind the United States and Soviet Union.

The Rome World Championships set the stage for the Atlanta Olympics. In the Olympic 200m breaststroke race, Mike Barrowman’s world record set in Barcelona was to stand (for a total of ten years), but Norbert was to take the gold medal in a come-from-behind win to beat his teammate Karoly Guttler, silver and Andrei Korneev (RUS) , bronze. Norbert continued training after the Olympic Games and competed in the 1998 World Championships of Perth, winning the bronze medal in the 200m breaststroke behind Kurt Grote (USA) gold and Jean Sarnin (FRA) silver, all within .19 seconds of each other. In the 4x100m medley he aided teammates Attila Czene, Peter Horvath, and Attila Zubor in capturing the bronze medal.

Rozsa competed in the 200m breaststroke at the 2000 Sydney Olympic Games, but swam only a 2:14.67 in the semifinal; over two seconds slower than his gold medal winning time four years earlier.

Following retirement from swimming, Norbert enrolled as a student in the University of Physical Education in Budapest. His new sports are now fishing and racing sports cars.