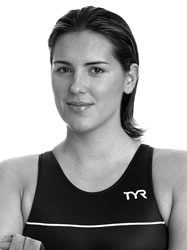 She was born into an athletic minded family in 1982, in Simferopol, Ukraine, when it was the capital of the Autonomous Republic of Crimea within the old Soviet Union. Because of the Soviet Union’s emphasis on physical education, the Ukraine was left with hundreds of stadiums and swimming pools. This little girl picked the swimming pool to excel. She first started in gymnastics, but once she started swimming at age seven, she never looked back.

By age eight, she was training four hours daily with an hour a day of dry-land. Her hard work paid off as Yana Klochkova became the greatest individual medley swimmer in the first decade of the 21st century and maybe of all-time.

At the 2000 Sydney Olympics, she won gold medals in the 200 meter and the 400 meter individual medley, the latter in world record time, lasting seven years. She also won the silver medal in the 800 meter freestyle behind Hall of Fame swimmer Brooke Bennett of the United States.

Between 2000 and 2004, she lost only one individual medley race at the short course European Championships in Antwerp, 2001.

At the 2004 Olympic Games in Athens, Klochkova became the first swimmer to win consecutive pairs of Olympic gold medals in the 200 meter and the 400 meter individual medley and was dubbed the “Medley Queen”.

At the 2008 Olympic Games in Beijing, she was the flag bearer for her country. With her successive Olympic wins, she will always be remembered as the greatest individual medley swimmer in the history of the Olympic Games.