HAROLD “STUBBY” KRUGER was born on this day: September 21st

As “King of Comedy Diving”, Kruger barnstormed with Johnny Weissmuller, making swimming a spectator sport. Their exhibition at the 1924 Olympic Games had so many encores that show exhibitions were banned from future Olympic swimming.  Stubby was also king of the all-around swimming/diving pentathlon, a U.S. National Championship event in which he tied with Weissmuller in 1924 and won outright in 1925.

He briefly held a world backstroke record, and made two Olympic teams, in the 100 meter backstroke event.   He played on the U.S. Olympic Water Polo Team and was also a very accomplished diver.

He later starred as a comic in the Billy Rose Aquacades before becoming a full time stuntman in the movies.  His career in Hollywood  began in the era of silent films and lasted three decades, into the 1950’s. Kruger was stunt double for huge stars like Douglas Fairbanks, and Spencer Tracy, as well as friends Johnny Weissmuller and Buster Crabbe. He would play supporting roles in films as well.  All told, he was part of at least 20 films.  His last role was stand-in for Spencer Tracy in Hemingway’s “Old Man and the Sea”. 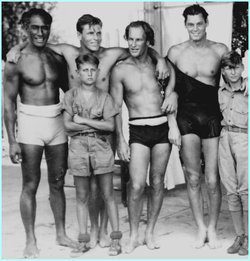 Kruger died at the age of 68 and is buried near Diamond Head in Honolulu.  He was inducted into ISHOF in 1986 and to this day we have a great Stubby Kruger display and it is always a favorite of visitors.