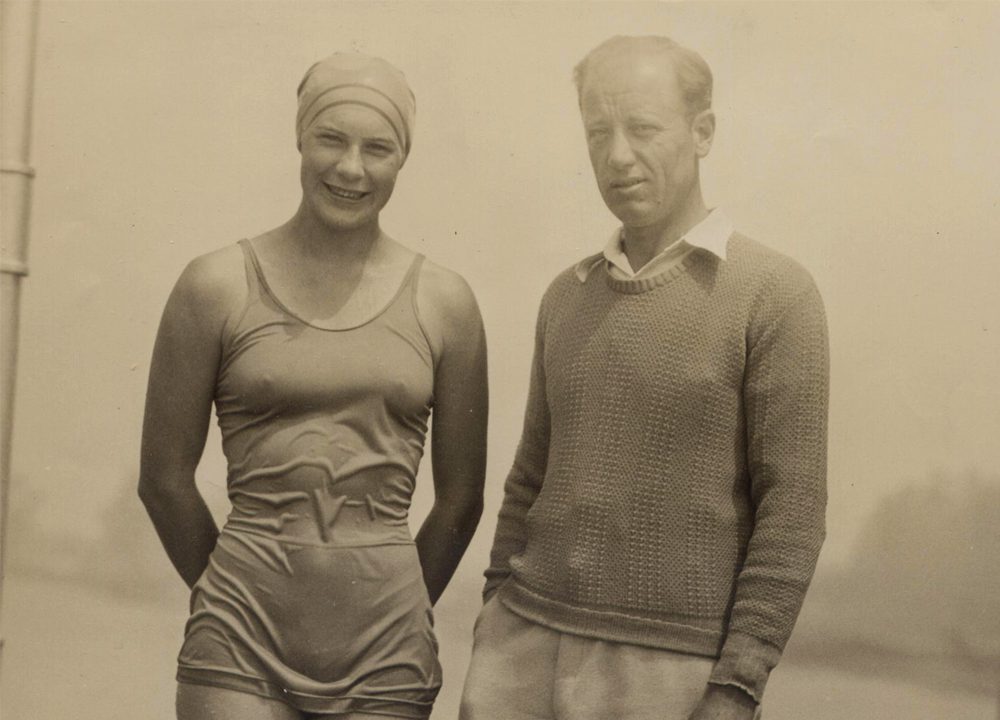 This year marks the 90th anniversary of the advent of Helene Madison as a dominant force in freestyle swimming. By the time the American was done racing, she had gone down in history as an Olympic and World-record pioneer who set 16 World records on freestyle in just 16 months. This day in 193o she claimed the global 880y (800m) standard

Helene Madison (USA) was dubbed “The Queen of Waves“. Her pioneering achievements in the early 1930s live eternal: she was the first swimmer ever to hold every world freestyle record – from 100yd through to the mile – at the same time, a feat that has been matched only once since, by Shane Gould (AUS, 1971-1972).

Gould remains, technically, the first to ever be accepted as having held the official 100-1500m records simultaneously: Madison set the 880 yards world mark once in her career, in 1930, but the 800m distance was not an official world record until after the American’s swim, while the distance was not swum in Olympic waters until 1968.

Madison, who passed away in 1970, would never know but in 1973, FINA revisited its world-record history lists, removed Goddard and a swim by American Lenore Kight, from 1933, and accepted Madison’s mark as an official world 800m record. Not long before its decision on Madison, FINA had stopped accepting the 880 yards distance for world-record ratification over 800m, leaving Debbie Meyer, the pioneering 1968 triple Olympic gold medallist for the USA, as the last (and therefore, technically, reigning, world record holder over 880 yards, at 9.44.1 from a swim in 1967.

The Madison Pantheon Of Pioneering Pace

On March 6th, 10930, Madison broke the first of the seven World freestyle records she would break between 1930 and 32 that remain on the books of official FINA World standards.  Four years earlier, fellow American Martha Norelius had left the 200m freestyle standards at 2:40.6. Madison stopped the clock at 2:34.6 in St Augustine that March day.

Madison, who hailed from what was once written up as “the tiny town” of Green Lake – a district of Seattle, with the lake at its heart – competed for the Washington Athletic Club in Seattle her entire career, the protégée of coach Ray Daughters.

At the 1932 Olympic Games in Los Angeles, Madison claimed three gold medals in the pool, over 100 and 400m freestyle and as a member of the 4x100m freestyle with USA teammates.

Her victory over 400m freestyle was the last of the three and produced a World record. She celebrated the moment by dancing with Clark Gable at The Coconut Grove, a haunt of the rich and famous of American society.

Here’s how Madison’s campaign panned out:

In the second Olympic heat in Los Angeles, 1928 bronze medallist Joyce Cooper lowered the Olympic record in 1:09.0, before Madison, 19, shaved 0.1sec off that in the third heat. In the next heat, Eleanor Saville (nee Garratti), second in 1928, improved the standard to 1:08.5.

In the semis, a shooting star called Wilhelmina den Ouden (NED), 14 years old, roared down the pool and set a world best time in a 50m pool of 1:07.6. Madison, 19, responded with a spectacular sprint down the first length of the second semi-final, in 29.2 that suggested a 1:04 was possible well before its time.

Madison faded to a 1:09.9 on the way home, scraping through in fifth place for the six-lane final. But having given warning of her potential for pioneering speed and having heaped pressure on the shoulders of 14-year-old Den Ouden, Madison delivered on promise in the final: in and Olympic record of 1:06.8, Madison claimed her first Olympic crown a second ahead of Den Ouden.

Helene Madison was joined by Josephine McKim (who had swum in the heats in 1928), Helen Johns and Eleanor Saville (nee Garratti) Lenore Kight, for a world record relay victory of 4:38.0, almost 10 sec inside the 1928 world best time of the 1928 champion team from the US, which included Garratti. FINA recognised relays for official world-record status from 1932 onwards.

At a time when third place in heats often meant that a swimmer would not progress to the semi-finals regardless of whether their time (as opposed to place) merited it, Marie Phillipsen (nee Braun, NED), 1928 100m backstroke champion and silver medallist in the 400m freestyle, lost out in 5:50.5.

In the final, Madison and Knight raced stroke-for-stroke. At 200m, they split in 2:38.0, not far from the 2:34.5 at which Madison held the world record over 200m. Thin air could hardly split the two for the rest of the rest and at the wall, it was Madison who had the longer reach, taking the gold in 5:28.5, 0.1sec ahead of Kight and 4sec under her own world mark.

When The Racing Was Done

Helene Madison’s homecoming to Seattle was something modern celebrations for Olympians can barely compete with. Greeted by the largest ticker-tape parade in Seattle history, she was idolised and lionised, feted and banqueted. With no challenges left in swimming, Madison turned “pro”, endorsing cereals and – gasp! – Camel cigarettes.

She moved into films but was not a success. She applied for a job at Green Lake beach as a swim instructor but she came up against city rules that barred women from teaching swimming.

During the 1936 Games in Berlin, Madison could be found at Green Lake, serving at the hotdog stand. She was unlucky in love too: she married three times. Madison later became a Licensed Practical Nurse. Sadly, she contracted diabetes and throat cancer in her fifties. At 57, she passed away in the basement apartment she shared with her parakeet and a Siamese cat, across the street from her beloved Green Lake.

In a 48-year career as a swimming coach (1916-64), Colorado-born and then lifelong Washington state resident Ray Daughters taught nearly 50,000 people how to swim. A swimmer himself, he earned the undying admiration of the aquatic world in the Pacific Northwest as well as the national stage, writes Michael J. Stott.

Daughters mentored five Olympic swimmers, who trained out of his home base, the Washington Athletic Club (WAC) in Seattle. Four were freestylers who competed during the 1930s:

His fifth Olympian, Nancy Ramey, also was a world record holder (butterfly) and won a silver medal in 1956, bringing his swimmers’ Olympic medal total to eight.

Once described by Seattle Times sports editor Georg N. Myers as “a Svengali in a bow tie,” Daughters was a “big man who was brusque and burdened by an unceremonious and indestructible sense of humor.” He also had an eye for talent, preferring it over just native speed. Before he retired to become WAC athletic director exclusively, Daughters worked closely with each swimmer, setting their practice hours and competitions. He emphasized conditioning, timing and rhythm, working meticulously during long practices to refine swimmers’ strokes. He also advised on dietary habits and insisted on 10 hours sleep a night, knowing his athletes were going to bed exhausted.

His methods produced results, earning swimmers at least 30 world and 301 American records as well as 74 national championships. Daughters liked to win, and he was not above scheduling swim meets to have his swimmers break national records. For instance, on Nov. 7, 1931, he conducted a meet specifically so that Madison could go for American records at 600, 700, 800 and 880 yards, while Medica aimed at the Northwest 220-yard standard.