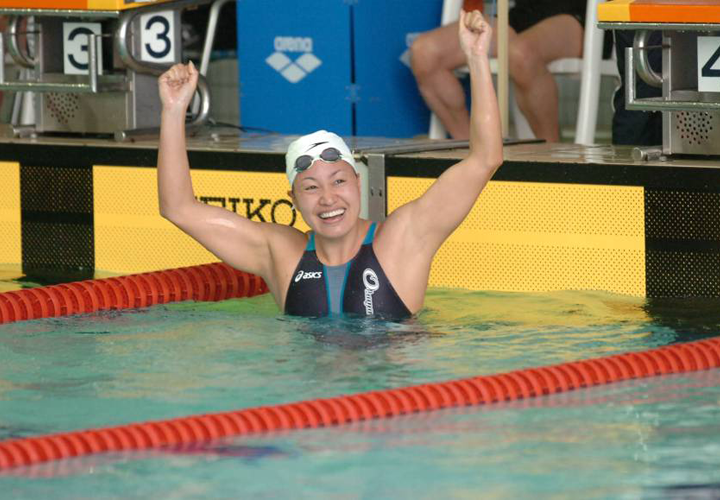 In the early ‘90s, Hitomi Maehara Matsuda was known as one the top young stars in Japan’s swimming program. She joined the national team in 1992 and at the 1993 FINA Short Course World Championships, Matsuda took silver in the 200m Breast and also placed 4th in the 200m IM . But after not getting elected for Japan’s 1996 Olympic team, she retired at the age of 19.

Matsuda returned to competitive swimming in 2003 because she realized how much she loved and missed it. This time, however, it was as a Masters swimmer.

Since 2004, Matsuda has been in the Top Ten every one of the 14 years she has competed. She has set 35 long course and 45 short course FINA Masters World Records in the I.M., freestyle, butterfly and breaststroke. In world rankings since 2004, she has a total of 176- number 1, 55- number 2 and 17- number 3 total world rankings in the I.M., freestyle, butterfly, backstroke and breaststroke.

In an April 2013 feature, Swimming World Magazine named the Tokyo native one of the Top 12 World Masters Swimmers of the Year for 2012. The article noted that she had been a regular on the list (as a winner or runner-up) since 2005, missing out just once.

Matsuda believes that Masters Swimming has many benefits. It keeps you healthy and it allows you to make new friendships, as well as keep in touch with many old friends in the swimming world. “ In 2014, at the FINA Masters World Championships, I met again many old friends and made many new friends.

Matsuda will be inducted as part of a group of nine (9) outstanding individuals will be inducted at the IMSHOF’s annual ceremony. The event will be held at the Hyatt Regency Jacksonville Riverfront in conjunction with the 2018 United States Aquatic Sports XXXVIX Convention.