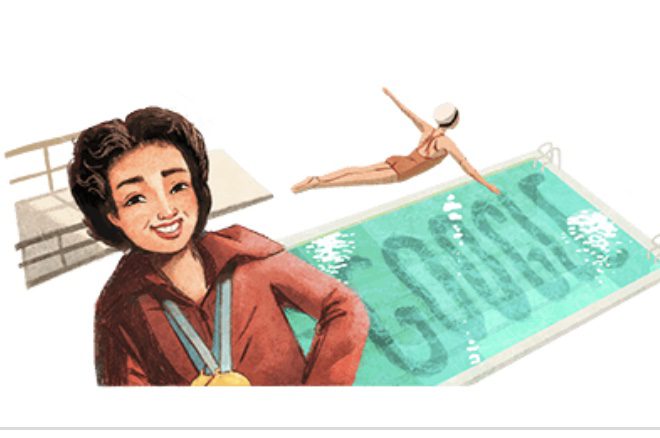 On August 3rd, 2020,  Google Doodle is launching a Doodle celebrating ISHOF Honr Diver and friend, Filipino American diver and coach Victoria
“Vicki” Draves, the first Asian American woman to win an Olympic medal. On this day in 1948, Draves
won the gold medal in the women’s 3-meter springboard event at the London Summer Olympics.

Victoria Manalo Draves was the first woman in Olympic history to win both springboard and platform diving crowns in the same games.  She was the only swimmer or diver to gold medal in two individual events at the 1948 London Olympiad. Her rise to No. 1 in the world was meteoric but far from easy.  Vickie was a twin born in San Francisco to an English mother and Filipino father.  When Vickie was 16, she and her sisters would take the trolley car to Fleishhacker Pool to swim and admire the divers.  Admiration was mutual as one of the boy divers introduced her to Phil Patterson, coach of then national champion Helen Crlenkovich.  Vickie learned rapidly under Phil, but her biggest hurdle was not on the diving board.  Her diving club on Nob Hill required that she drop her father’s Filipino name and take her mother’s maiden name, Taylor.  Finances were another problem and a year later, she joined Charlie Sava’s famed Crystal Plunge team where she worked with Jimmy McHugh.  McHugh left coaching and on Sava’s advice, Vickie crossed the bay to dive with Lyle Draves and his star pupil Zoe Ann Olsen at the Athens Club in Oakland.

With a third diver, Gloria Wooden, Draves took his girls to the 1945 Indoor Nationals in Chicago and they placed 1, 2, 3 in the 3 meter springboard.

Wartime duties, another Nob Hill meet argument over Vickie’s Filipino parentage, and Draves returning to Southern California left Vickie once more without a coach.  There followed some commuting to Los Angeles, a second and a third at the Outdoor Nationals, and then, on the death of her father, Vicki retired and returned to San Francisco and to her old job as a secretary in the Army Port Surgeon’s office.

When the war ended, Vickie finally moved to Southern California for good.  She married her coach and her winning ways began immediately with the national Tower Diving Championship (10 meter platform), in 1946, 1947 and 1948.  In 1948, she won her first springboard national title.  She made the team but was not first at the Olympic Trials in either springboard or platform.  She was the first woman of oriental ancestry to win an Olympic gold medal in diving.  The first man was Korean-American Sammy Lee, who, like Vickie, stands 5’1″ when he stretches.  The incredible performances of these two Asian-Americans helped heal the scars of an Olympic-canceling World War, and personified the Olympic revival of individual competition regardless of race, creed or national origin.