More than 460 national and international participants competed in clear ocean waters off the Florida Keys Saturday during the Swim for Alligator Lighthouse, an 8-mile open-water challenge.

Tampa Bay, Florida, resident Connor Signorin, 29, emerged from the Atlantic Ocean as the top individual swimmer with a time of 3 hours, 5 minutes and 37 seconds. The top female finisher was Olympic champion Brooke Bennett, 41, of Clearwater, Florida, who completed the race in 3:19:20. The distance star captured three Olympic gold medals during her career, titles in the 800 freestyle in 1996 and 2000, and a gold in the 400 free in 2000. 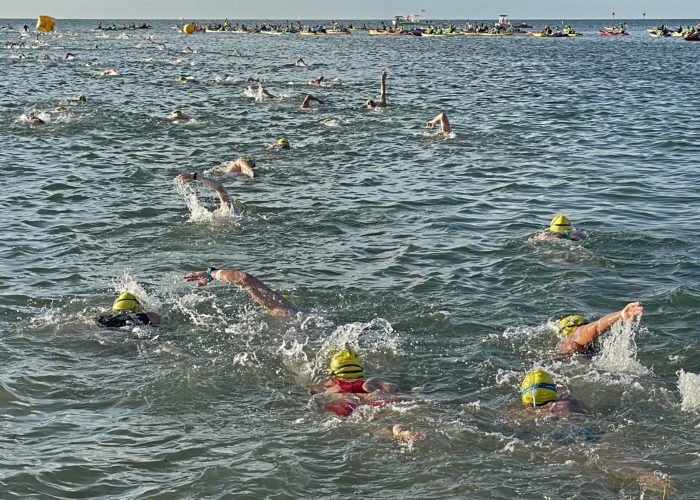 The winning four-person team was a mixed relay of male and female competitors from Fort Lauderdale, Florida. Tim Shead, Harold Wagner, Serge Wenzel and Ann Kilpatrick posted a time of 3:34:42.

Athletes swam to Alligator Reef Lighthouse off Islamorada, rounded the beacon and came back to the start and finish points at Amara Cay Resort.

Founded by Florida Keys artist “Lighthouse Larry” Herlth, the annual race is staged to raise awareness about the need to preserve the almost 150-year-old Alligator Lighthouse and five other aging lighthouses off the Florida Keys. The event also raises college scholarship funds for Keys students interested in competitive swimming.

Recently, the Islamorada community-based organization that hosts the annual swim was approved to take ownership of the lighthouse under the National Historic Lighthouse Preservation Act. Restoring it is likely to take five to seven years and cost up to $9 million, according to organizers. Fundraising efforts have already begun at savealligatorlighthouse.org.

Constructed to warn ships away from the Florida Keys reef tract, the lighthouses are no longer maintained, as their function has been replaced by modern Global Positioning System navigation.