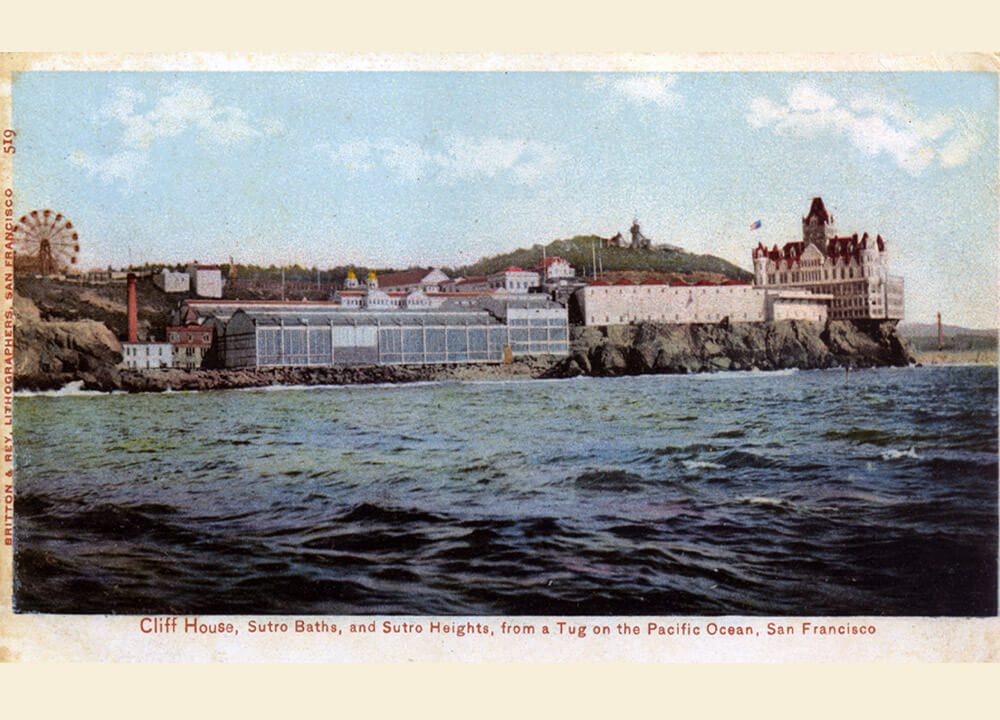 Located on the ocean side of the southerly entrance to San Francisco Bay’s Golden Gate, the Sutro Baths—built in the 1890s by Adolph Sutro and eventually destroyed in the 1960s—was the world’s largest indoor swimming facility and one of the most amazing recreational and entertainment complexes ever built.

In 1888, Adolph Sutro, “King of the Comstock” and one of the wealthiest men in America, was finally in a position to fulfill a lifelong dream: to build a Public Bath that would rival in magnitude the beauty and utility of the Roman Baths.

Sutro came by his dream naturally enough. He had been born in Aachen, Prussia, a city with a rich history as Charlemagne’s imperial city, known for its thermal springs and bathing culture since Roman times. Long before Charlemagne bathed in the warm waters of his Pfalz, the Romans had discovered Aachen and named the town after the Celtic god of water and health. Today, Aachen remains noted as a spa resort.

Adolph Sutro arrived in California in 1850 at the age of 20 shortly after gold had been discovered at Sutter’s Mill. He was a clothier by trade, a mining engineer by education and an entrepreneurial visionary.

He made his first fortune by solving the problem of ventilating and draining the deep mines of the “Comstock Lode.” Then he used his underground expertise to excavate tunnels for railroads serving the Bay Area. He invested much of his fortune in San Francisco real estate, and by 1881, he owned 10% of all the land in the city, including the Cliff House and a large track of land on the Pacific coast.

BUILD IT, AND THEY WILL COMESo what does a boy from Aachen do when he becomes as wealthy as a Roman emperor? He builds a magnificent Public Bath like they did in Rome—and the public rewarded him by electing him mayor of the city before it opened.

For Adolph Sutro, the idea of a beach bathhouse, like those on the East coast in Atlantic City and Coney Island, was impractical. The Pacific Ocean was always cold, and as Mark Twain famously said, the coldest winter he ever experienced was a summer in San Francisco.

So, he decided to build an indoor, heated bathing complex that would rival the architectural and engineering achievements of any bathing establishment built by any Roman emperor or modern pool designer.

Sutro began planning his lavish Bath in 1888 by offering architectural firms a $500 prize for the best design. Local architects C.J. Colley and Emil S. Lemme, who had also designed his magnificent Cliff House, won the prize.

After years of amazing engineering and design work—and a long fight with the Southern Pacific Railway Company for the rights to build a trolley service to get customers from downtown to his natatorium—Sutro Baths “officially” opened in 1896.

THERE’S MORELike the Public Baths of the Roman era, Sutro offered more than just bathing for his customers. There were promenades and pavilions with sequestered alcoves, galleries, many staircases and corridors adorned with artifacts and specimens collected from his travels, including tropical plants and flowers, fountains, Egyptian mummies, Aztec pottery, Chinese swords, stuffed birds and animals and Indian totems.