Seventy-five years ago, the most significant moment in the history of all modern sports took place when Jackie Robinson stepped onto the field with the Brooklyn Dodgers, breaking the color barrier in Major League Baseball. Robinson, who played mostly second base in his career, played first base on April 15, 1947, at Ebbets Field in Brooklyn.

It was the start of a long struggle for integration in all sports and the start of a long battle Robinson endured, with years or racial slurs, threats on his life and pitchers throwing at his head. But it was a fight he was willing to endure, and do so without fighting back, which made the “Great Experiment” as it was called, work.

Robinson went on to transform the game, bringing the electric base running of the Negro Leagues to the majors, quickly becoming one of the game’s greatest stars. He won Rookie of the Year in 1947, then the MVP in 1949, transforming the Dodgers into a perennial World Series contender.

But more importantly, it transformed the game.

Within a few years, other black stars — some of the game’s greatest players in history — would join him in the majors. It was a baseball revolution, which within five years saw baseball legends like Willie Mays, Monte Irvin, Roy Campanella, Minnie Minoso and Satchel Paige follow Robinson to the majors. Just a few years later, Hank Aaron, Roberto Clemente, Frank Robinson, Bob Gibson and Ernie Banks followed, ushering in the Golden Era of baseball.

Sure, his baseball exploits gave him a platform, but it was what he did with that platform that transcended baseball.

His heroics on the field led to other sports becoming integrated. In fact, once at Ebbets Field, Robinson spoke to a group of teenagers from Canada who had earned a trip to New York. A young Willie O’Ree was just 13 but told Robinson he wanted to integrate the NHL just as Robinson had done with MLB. A few years later, O’Ree was the first black hockey player in the NHL.

These athletes revolutionized their sports and became role models for kids of all backgrounds.

Swimming has had several barrier breakers:

Enith Brigitha was one of the first Black swimmers to reach the top of the sport. She was fittingly born on April 15 — Jackie Robinson Day — and born in the year that Robinson led Brooklyn to its only World Series title (1955).

Brigitha, who was born in Curacao and represented the Netherlands, became the first Black swimmer to earn a swimming medal at the Olympics. She won the bronze medal in the 100 freestyle and 200 freestyle in the 1976 Olympic Games in Montreal.

She finished behind two East German swimmers in both events and with the controversial doping that took place by the East Germans, she very well could have been the first Black swimmer to earn a gold 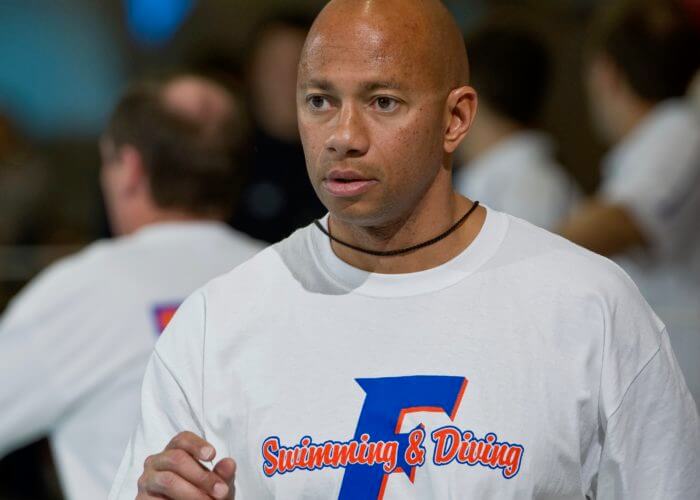 Anthony Nesty made his impact in swimming long before taking over as coach of the University of Florida. Nesty won the gold medal in the 100 butterfly at the 1988 Olympic Games in Seoul while competing for Suriname.

He was the first Black male swimmer to earn a medal and the first to win gold and just the second gold medal winner to ever come from a South American nation. He won the bronze in the same event in 1992 in Barcelona.

He is now one of the few Black coaches in college swimming.

In 2000, Anthony Ervin became the first African-American swimmer to earn a gold medal in Olympic swimming.

He won the gold in the 50 freestyle, tying teammate Gary Hall Jr. Ervin was just the second swimmer of African decent, following Nesty, to win a gold medal at the Olympics. Ervin is of African-American and Jewish descent.

Ervin won gold in the 50 freestyle 16 years later in 2016 at the age of 35, becoming the oldest individual Olympic swimming champion. He won three golds and a silver during his Olympic career, which spanned three Games.

Maritza Correia McClendon was a Black swimmer from Puerto Rico who became the first Puerto Rican of African decent to be on the U.S. Olympic team, competing at the 2004 Games in Athens.

She earned the silver medal on the 400 freestyle relay and was the first Black female swimmer to set an American and world record in swimming.

In 2008, Cullen Jones joined Nesty and Ervin as Olympic gold medalists. As part of the 400 freestyle relay, Jones won gold in Beijing and was also the first African-American male to hold a world record, as the U.S. relay squad set the mark.

He also broke the American record in the 50 freestyle (21.59) at the Olympic Trials.

But the relay was a huge moment for Jones and swimming and was heightened by the fact that this was one of the most exciting events in swimming history as Jason Lezak chased down France’s Alain Bernard in the anchor leg to give the U.S. gold and preserve the record-setting 8-for-8 gold performance by Michael Phelps.

Jones returned to the Olympics in 2012 and won gold in the 400 medley relay and claimed silver in the 50 freestyle and 400 freestyle relay. Jones was part of the historic 2012 U.S. Olympic team that was the first to have more than one African-American swimmer on the team. Jones was joined by Ervin and Lia Neal in 2012.

In 2016, Simone Manuel became the first African-American woman to win an individual Olympic medal in swimming, as well as set an Olympic record and American record. She and Canada’s Penny Oleksiak tied for the gold in the 100 freestyle and broke the Olympic record in the event. Manuel is also a three-time world record relay swimmer.

At Stanford, she was a six-time individual NCAA champion, leading an historic 1-2-3 finish with Lia Neal and Natalie Hinds, the first 1-2-3 sweep by African-American swimmers in NCAA history.

These swimmers have led the way into a sport that continues to diversify. African-Americans Lia Neal and Natalie Hinds have become Olympians. Reece Whitley has excelled in the breaststroke and Giles Smith was named captain of an International Swimming League (ISL) team. David Curtiss broke a national high school record and became an international medalist.

Today, we remember Robinson who got the ball rolling by breaking the color barrier in Major League Baseball.