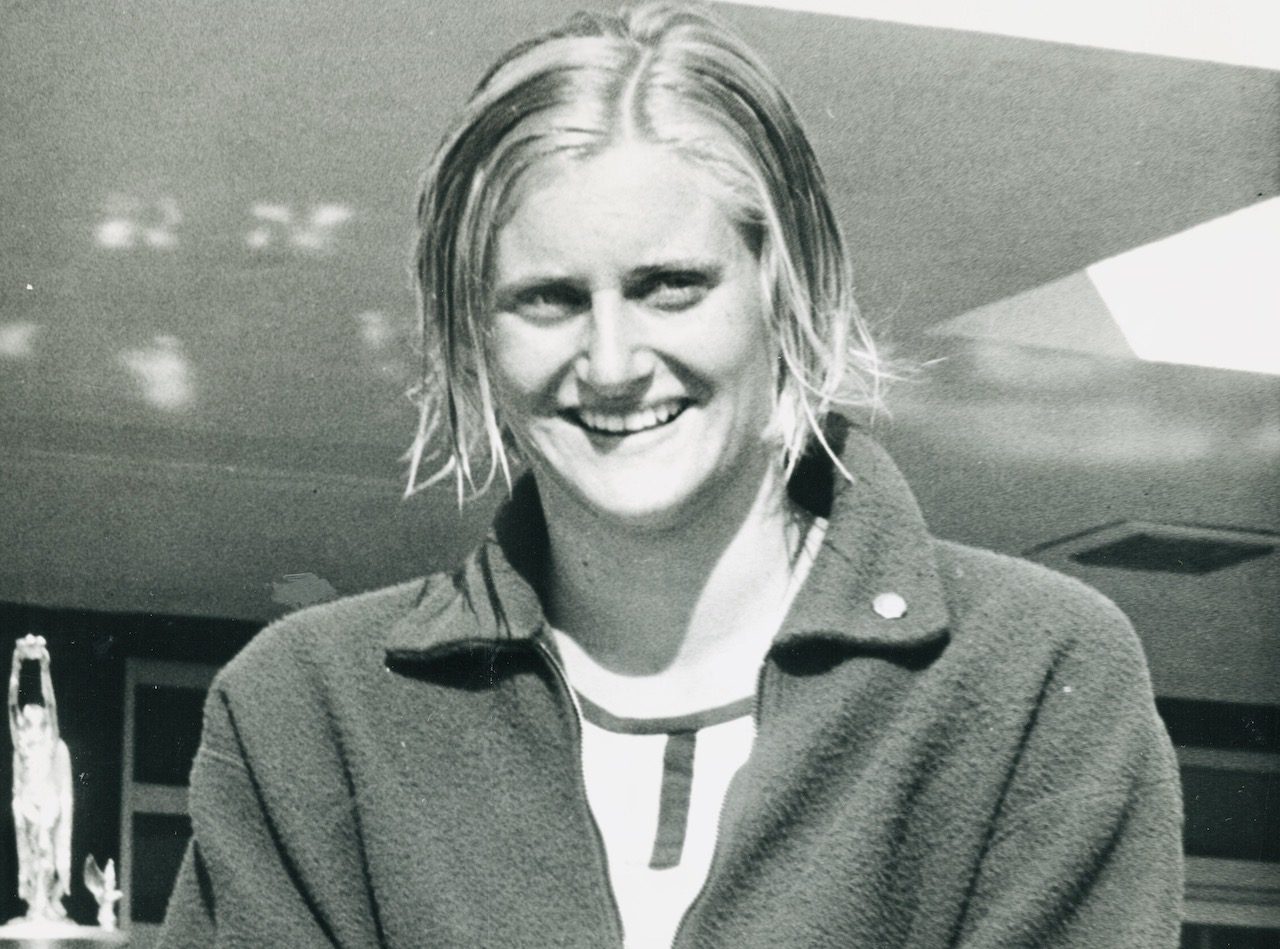 Today marks the 50th anniversary of the first of four World records Karen Moe set over 200m butterfly, the last of which was good for Olympic gold at the 1972 Olympic Games in Munich.

When 17-year-old Moe, clocked 2:20.7 in her home pool at Santa Clara this day half a century ago, she ended the five-rear reign on the clock of Dutch ‘gentle giant’ of butterfly, Ada Kok, the 1968 Olympic champion who had left the World record at 2:21.0 when she raced at Blackpool’s Derby Baths  in England on August 25, 1967.

At U.S. Olympic trials in Chicago, Moe, coached at Orinda Aquabears by Ron Richison and then at Santa Clara by George Haines  left no-one in any doubt that she was queen of pace once more: 2:16.62, the first World standard to be timed to to a 100th. Come Munich, the first heat saw the Olympic record fall, to Rosemarie Kother, of the GDR, in 2:18.32. The heat was on. Daniel chucked the gauntlet back with a 2:17.18 in the second prelim to grand lane 4 in a final featuring four swimmers inside 2:20 in qualification.

Moe had most left in the tank, scorched to the title in what would be the last solo World record of her career: 2:15.57, more than a second inside her trials time. That marked the first time the title had been claimed in a World record, after the event was introduced in 1968, and the last time it took a global standard to claim the crown until Beijing 20087, when China’s Liu Zige led an out-of-the-blue home 1-2 with Jiao Liuyang, 2;04.18 to 2;04.72, Aussie Jess Schipper third in 2:06.26.

In Munich, Moe led a USA sweep: Collela took silver in 2:16.34, Daniel bronze in 2:16.74, locking Kother out in 2:17.11. When she was inducted into the American Swimming Coaches Association Hall of Fame as a coach later in life, Moe noted that Haines taught his pupils that the winner would be the swimmer who could maintain the best and most efficient technique for the longest distance throughout a race.

Moe was locked out in fourth on 2:12.90, just 0.04sec shy of returning to the podium four years after glory in Munich.

Moe would be a pioneer later in life too: she went on to coach women’s swimming at the University of California-Berkeley for 14 years. During that time she had tremendous success: three of her athletes – ‘fly legend and double ‘fly Olympic champion of 1984,  Mary T. Meagher, Conny van Bentum and Hiroko Nagasaki – won nine NCAA titles (See Michael J Stott feature below).

Moe, the first person (man or woman) to be inducted into both the International Swimming Hall off Fame as a swimmer and the American Swimming Coaches Association Hall of Fame, she was forced to give up her coaching career and move into administrative roles after the death of her first husband, which left her as a widower with two children. She told Swimming World last year:

“I am sad that I had to give up my coaching career prematurely after becoming widowed with two young children. But, ‘once a coach always a coach,’ right? Just ask my friends at Masters swimming, where I am known to do friendly stroke interventions when my coaching impulses take over.”

Moe was serving as assistant director when she was terminated in 2004 after complaining about the treatment of women in the athletics department. Moe Humpreys (her married name) sued for gender discrimination and won a settlement of more than $3.5 million.

The Honors and a Very Meaningful and Insightful Speech At ASCA:

Last year, Moe Humpreys featured in Swimming World Magazine in our Lessons with the Legends series, with Michael J Stott. You can order the print copy of that Magazine, a version of the lovely feature reproduced here:

Before and after she became the first women’s head coach at the University of California-Berkeley, Karen Moe was a fighter. Born in the Philippines and educated in California, Moe emerged as a standout swimmer under Orinda Aquabears coach Ron Richison and Santa Clara’s George Haines.

Slight in build, Moe learned early that technical proficiency would be the key to her success. This despite the fact that from the ages of 15-17 she was required to wear a Milwaukee Brace 23 hours a day as treatment for the spinal conditions, scoliosis and spondylolisthesis. Her doctor made an exception to this protocol to allow her to participate in all of her swim practices.

And what success it was—producing world records in the 200 meter butterfly in 1970 (at age 17), 1971, 1972 (twice) and an Olympic gold medal in Munich (and fourth in the 100 back.) Moe later re-emerged after a 40-month retirement (except for three college seasons), trained for 10 weeks, then made and was named a captain for the 1976 Olympic team. In the first heat, she set an Olympic record, only to finish fourth in the 200 fly final (with an American record 2:12.90) just behind a trio of steroid-fueled East Germans.

In 1978 at age 25, with a bachelor’s and master’s degree from UCLA, Moe was hired as the Golden Bears coach. While at Berkeley, she compiled a dual meet record of 89-42-1, mentored six Olympians and 39 different NCAA All-Americans. Three athletes – Mary T. Meagher, Conny van Bentum and Hiroko Nagasaki – won nine NCAA titles. Her 1982 team finished fourth in the AIAW championship meet. In 10 NCAA year-ending competitions, her Bears had six fourth-place finishes and a fifth, and never ended the season worse than 12th. In 1987, she was named the women’s NCAA Division I Coach of the Year.

As Karen Moe Humphreys, she accrued additional honors when she was inducted into the International Swimming (1992) and ASCA (2010) halls of fame.

Looking back on her coaching, she recalls:

“I think the challenges I had when coaching were primarily because we were poorly funded. There were very few full scholarships. A lot of people were on very small scholarships or none at all.”

With the conclusion of her Cal coaching career, Karen Moe Humphreys assumed a variety of athletic administrative duties at Cal (1992-2004). Moe sued the university after being laid off abruptly. A three-year litigation was settled with her reinstatement with back pay and reimbursement of her legal expenses.

For an illuminating chronicle of her frustrating battle with the school administration, consult Karen Moe Humphreys: Oral Histories on the Management of Intercollegiate Athletics at UC Berkeley: 1960-2014.

In her own worlds

“I was fortunate and greatly influenced by two terrific technical coaches: my first coach at Orinda Aquabears, Laurabelle Bookstaver, and George Haines at Santa Clara Swim Club and at UCLA. Laurabelle taught me how to properly execute every stroke and kick so that mindful practice became natural for me. As an age grouper—in part because I was smaller than my competition—I came to believe that to be successful, I had to swim technically better and work harder and smarter than others.

“In 1970, at 17, I set the first of four world records and made the move to SCSC to train with others shooting for the Olympics. It was there that I learned the importance of specificity, mental training, race rehearsal and proper stroke mechanics.

“Despite being a world record holder when I graduated from high school in 1971, I was not recruited to swim in college. I retired after the 1972 Olympics and enrolled as a regular student at UCLA. By 1973, there were whispers of athletic scholarships becoming available for women. I decided to go out for the team, and in 1974, I was awarded one of the first athletic full rides for women at UCLA. This ultimately led to being in position to try out for my second Games at the ‘old age’ of 23, while attending graduate school.

“My UCLA degrees were in kinesiology with a specialization in exercise physiology. My graduate work was centered around a comprehensive study of all of the factors contributing to peak performance, building upon what I had learned at SCSC. I had just started grad school in the spring of 1976 when I decided to try out for the Montreal Games—I had swum only during the collegiate seasons the previous three years.

“In those brief 10 weeks, I trained with Coach Haines and focused intently and specifically on doing everything possible to qualify in the 200 butterfly. It was fun to feel like I was applying what I had been studying to my own performance. After the Olympics, I completed my studies and was able to do research with the UCLA men’s swim team. I worked as a teaching assistant and coached the Beverly Hills Swim Team.

“When I was hired as head coach at Cal, I was thrilled to be able to work with intelligent women and create a program where they could be successful by training smarter and believing in continued improvement. Back then, many believed women/girls peaked at 17. The environment on the pool deck shared with Nort Thornton was positive, stimulating, creative and groundbreaking. We also benefited from round-table discussions with coaches of other sports. It wasn’t until long after I left coaching that I realized that what we were doing was unusual and ‘ahead of our time.’

“My swimming and coaching careers were greatly influenced by the timing of – and opportunities created by – the 1972 passage of Title IX of the Civil Rights Code. I started coaching a summer league team while in college and also took a club position while in grad school. In school, I thought I was preparing for a career as a research physiologist, not in coaching. However, in the mid-’70s, universities were required to show compliance with Title IX, resulting in the formation of new college teams and many job openings. I knew that I had something unique to offer in this new field of coaching college-aged women.

“While there were many more opportunities for jobs in women’s athletics, surprisingly few women were hired. Often in my career, I was the only woman involved, be it on a committee, a board of directors or the USA national team coaches list. Too many times I was ‘the first woman’ to be named the NCAA coach of the year or a head coach of a national team. I was even outfitted in men’s clothing for USA coaching assignments!

“I never questioned my right to coach in a field dominated by men although it was often annoying to be ‘the only.’ Perhaps this was because I had three wonderful women coaches as examples: Laurabelle Bookstaver, Claudia Kolb Thomas at SCSC and Colleen Graham at UCLA. Thankfully, I never thought that women shouldn’t or couldn’t coach. – Karen Moe Humphreys

“I am proud that I was the first person – not just woman – to be inducted into ISHOF as a swimmer and the ASCA HOF. I am sad that I had to give up my coaching career prematurely after becoming widowed with two young children. But, ‘once a coach always a coach,’ right? Just ask my friends at Masters swimming, where I am known to do friendly stroke interventions when my coaching impulses take over.”

Thank you to Karen Moe.