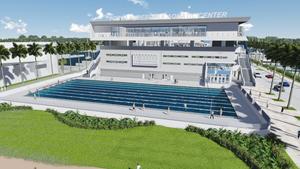 Plans for a new Fort Lauderdale aquatic center
have been swimming in controversy for years.

Commissioners may try to bring the project
back on budget. Or they could challenge the contractor’s price increase.

Mayor Jack Seiler would like nothing better
than to see a new swim complex opened before he leaves office in 2018. It’s a
project he inherited when he became mayor in 2009.

Earlier efforts — the 2002 City Commission agreed
to spend $27 million for a new complex — ended without success.

Commissioners will consider their options on
March 17.

What’s the history of the
aquatic center?

Poll: What should Fort Lauderdale do with its
proposed aquatic center?

The original complex opened in 1965 on state
land as the home of the Swimming Hall of Fame, which became the International Swimming Hall of Fame in
1968. The complex cemented the city’s reputation as a top destination in the
swimming world. Additional improvements were made in the 1980s and 1990s.

What’s wrong with the
current complex?

The center needs substantial repairs. Its
grandstands were condemned in 2011 and its pools don’t meet current competition
standards. The city loses more than $1 million a year operating the center,
although a new complex would still lose hundreds of thousands of dollars
annually.

How did we get to the
current situation?

The city had a grandiose vision when it sought
to rebuild the complex in 2009, but only one firm — Recreational Design and
Construction — submitted a bid. Its $76.1 million plan included restaurants,
commercial space and artificial surf machines. Besides being too pricey for the
city’s budget, commissioners feared it would bring too much traffic and noise
to the beach.

In 2011, a pair of independent reviews said
RDC’s business plan was deeply flawed and unrealistic. Commissioners requested
a smaller, less-intense version — without seeking new bids — that would keep
the city’s cost below $25 million.

A 2013 inspector general’s report found
problems with bidding on the project. It said state law required at least three
bids and criticized vague language in the city’s request that made it hard for
companies to compete fairly. It concluded the project should be rebid, but the
city disagreed. The State Attorney’s Office did not investigate the issue,
officials there said.

Haven’t there been
repeated calls for the project to be rebid?

Yes. The commission’s original proposal called
for a public-private partnership that included the developer putting some of
its own money into the project. RDC’s proposal once included an $18.7-million
private investment, but the current plan has none. That’s a change that could
have drawn more interest in the project.

Are there any other
potential hold-ups still out there?

The property was deeded to the city by the
state for a swimming hall of fame. Now that the hall of fame is moving to Santa
Clara, Calif., and won’t be part of the complex, the city will need clearance
from state officials for their plans.

Why is the hall of fame
leaving?

Hall officials were dissatisfied with the space the city
allocated them. They felt left out of the planning and its director
said the city was relying on an outdated competitive swimming model that
wouldn’t work without some type of water attraction that appealed to families.
The city also refused to subsidize more of the hall’s expenses.

The commission approved a contract with RDC in
September 2012 for a “guaranteed maximum price” of $32.4 million. The
commission also has another $1.3 million in changes that it plans to add to the
project. RDC officials say the city has taken too long to get the project
going, while the price of construction materials keeps rising. The company says
the new price needs to be $37.3 million or the city can remove items to lower
the cost.

Where’s the money coming
from?

The 2012 contract met the city’s goal because
only $24.8 million was coming from beach property tax dollars that have been
reserved for redevelopment projects. The other $7.6 million is from parking
revenue bonds, which would be paid back using parking fees from a new parking
garage on the site. Paying for the additional $1.3 million in changes the city wants
would bring its share to $26.1 million.

What will the new aquatic
center have?

One of its existing, ground level
Olympic-sized pools will now be the front of the redesigned complex, visible to
passing traffic. Another 50-meter pool and dive pool will be atop a three-level
parking garage. The diving platform would be wide enough to accommodate
synchronized diving competitions and there has even been consideration of a
super-tall platform that could be used for “cliff-diving” style
competitions. The complex will also include an indoor training facility for
divers.

The top front of the building will be a
glass-enclosed banquet facility with vistas to the ocean and the Intracoastal
Waterway.

RDC has suggested eliminating one of the
parking levels and one story of the main building to lower costs.

Wasn’t there a diving
controversy?

Divers complained that placing the diving
platform on top of the parking garage would be dangerous and subject them to
stronger winds at the higher altitude. The city commissioned a wind study that
showed the difference in wind speed was minimal at the higher level and the
design received the approval of national swim and diving organizations.

Commissioners considered putting the dive
platform out front of the new building, but that would have added about $6
million to the cost.