Let’s celebrate, on this date in 1931 one of the greatest Water Polo Players in Hungarian history was born: Kalman Markovits 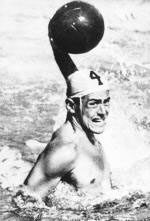 Markovits was on Hungary’s Olympic gold medal teams of 1952 and 1956. At the 1960 Olympics, the Hungarian team took a bronze.  Kalman Markovits played on the 1954, 1958 and 1962 gold medal European Championship teams.  All told, he played in 137 international competitions for his native country.

After retiring from playing, Markovits coached the 1968 Hungarian Olympic team to a bronze medal and won the Europe Cup and Super World Cup that same year.  He moved on to the Spanish National Team in 1985 and spent two years with the Mexican National Team before he made his way home to Hungary and the Hungarian National Team.

Markovits once again made his country proud as the 1992 Hungarian Olympic water polo team won the gold medal in Barcelona.

The world of water polo and all of aquatics lost Kalman on December 5, 2009.