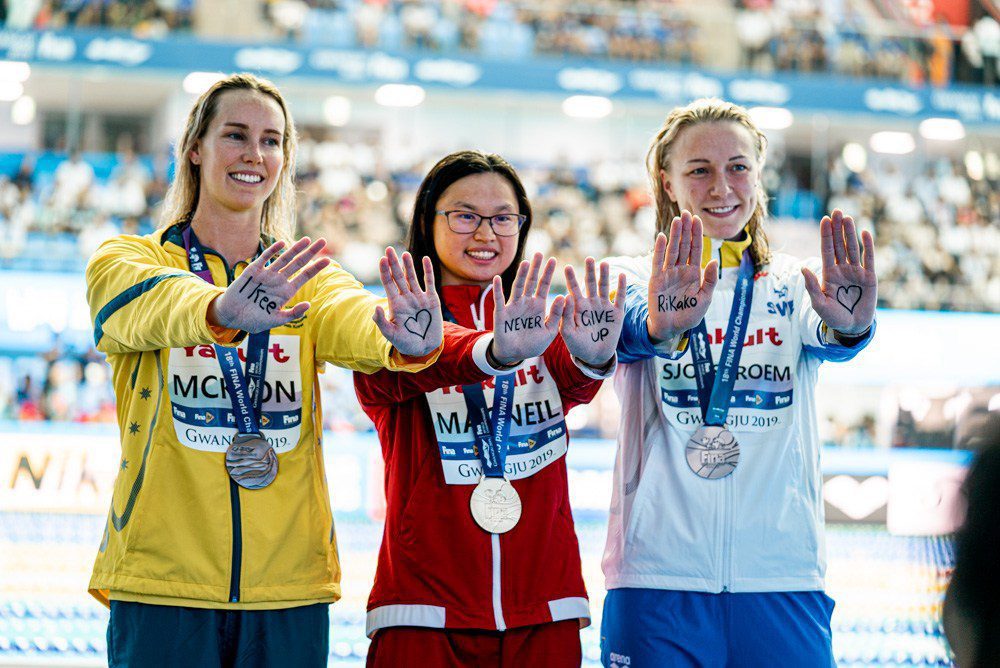 In a race that almost everyone in the venue expected to go Sarah Sjostrom’s way, Canada’s Maggie MacNeil rose to the occasion and won the 100 fly gold medal at 55.83 on Monday night at the FINA World Swimming Championships in Gwangju, South Korea.

But after last night’s women’s 400 free when Australia’s Ariarne Titmus stunned Katie Ledecky in the final to give Ledecky her first international loss in a race over 400 meters in her career, how could anything go as expected? Sjostrom has been relatively untouchable this decade, winning every world and Olympic title in the event since 2013. Like Ledecky, she had shown signs of invincibility in this event, but had some pressure this week in Gwangju.

Maggie MacNeil swam in Sjostrom’s semifinal heat on Sunday night and was with her stroke for stroke. If anyone could beat Sjostrom, maybe it could be MacNeil?

But this is Sarah Sjostrom we are talking about. She was the world champion at 15 in 2009. She’s won this event four times at Worlds and was aiming for an unprecedented fifth title and fourth straight to become the first woman to do so in a single event. Sjostrom also held the 11-fastest performances in the event and was the only woman to break 56 seconds in the last seven years. So one would be betting house money if they were going against the Swede.

But MacNeil went out and won the race. 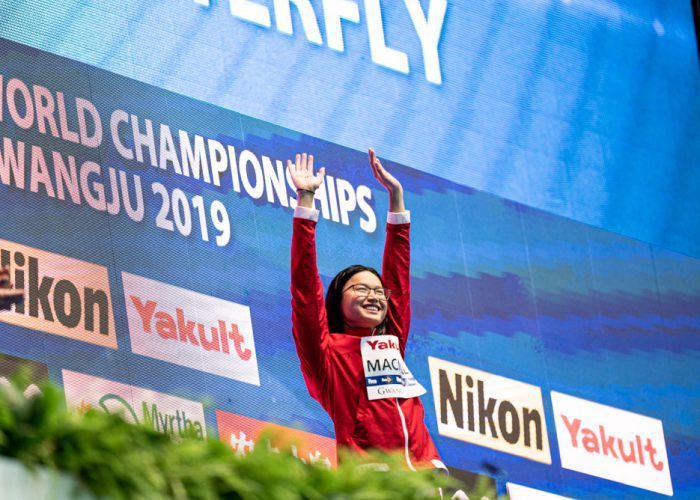 “It’s unbelievable. I really didn’t expect that,” MacNeil said afterward. “My second 50 tends to be my stronger part of the race so I was definitely was able to utilize that today.”

As for if she could beat Sjostrom, she said she was just hoping to get on the podium. But Sjostrom was gracious in defeat.

“She congratulated me and was just super-nice and so great and I have looked up to her forever so it means the world.”

MacNeil moved up to second all-time in the event and became the third woman under 56. Sjostrom was second in the final at 56.22. Australia’s Emma McKeon won the bronze medal at 56.61. She won her second medal in this event after winning the silver in 2017.

This has been an incredible 12 months for MacNeil. Her best time in 2018 was a 58.44 from the Pan Pac Trials. She moved to Ann Arbor to start her freshman year at the University of Michigan where she finished second at the NCAAs in March to become the third fastest swimmer all-time in the 100-yard butterfly. She ends her 2019 as a world champion and the sky is now the limit for MacNeil.

But what led to this meteoric rise for MacNeil? She was unsure what to attribute it to.

This is a surprising outcome for Sjostrom, who will not be hearing her national anthem for the 100 fly for the first time since 2011. It is a rare defeat and like Ledecky, many will be itching to see how she rebounds. She has the 100 and 50 free later in the week as well as the 50 fly, where she is the reigning world champion.

Australia has now medaled at 10 of the last 12 World Championships in this event. MacNeil’s gold is Canada’s first medal in this event at Worlds since Wendy Quirk won bronze in 1978.

The final notably did not feature Japan’s Rikako Ikee, who swam the fastest time in the world in 2018 at 56.08. She was diagnosed with leukemia in February and has been unable to compete this year. Medalists McKeon, MacNeil and Sjostrom wrote on their hands, “never give up” for Ikee. 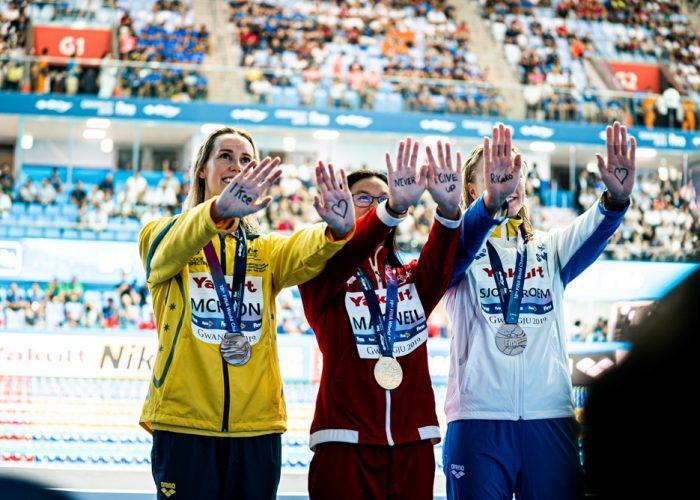 It was a touching moment and a great act of sportsmanship by the three women.

“It’s just to let her know we are thinking of her and we support and love her,” bronze medalist Emma McKeon said after the race.

It was Sjostrom who suggested to MacNeil and McKeon that they all write Ikee’s name on their hands. Ikee resumed light exercise in June and is hoping to get back on form next year.