On this day in 1879, British Water Polo Player George Wilkinson was born!!! Read his story: 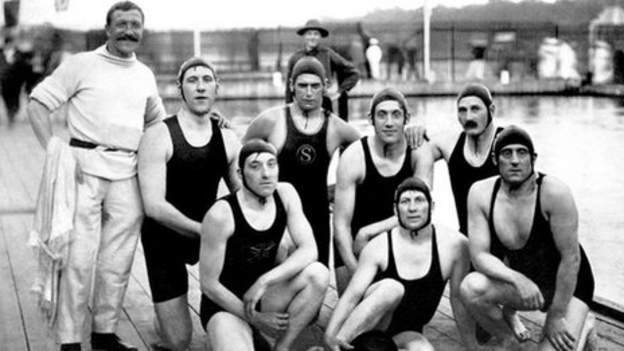 George Wilkinson (1887-1947) was the first superstar of English and world water polo.  The English invented the game and Wilkinson made the rest of the world believers.  He won his first Olympic gold medal at 20 and his third at 32.  The Manchester Osborne team who had dominated English water polo since 1894 took him to Paris on their 1900 Olympic Team without even a trial match.  On moving to Hyde in 1903 he joined, then captained the Hyde Seal Club which won the English Championships nine more times.  From 1901 until 1922 he played in international competition with the Great Britain team which he captained to a gold medal in 1912 at the Stockholm Olympics.  One can only speculate on the almost certainty that he would have won a record five straight Olympic gold medals but for Great Britain’s failure to compete in 1904 and again when WWI cancelled the 1916 games.  During his playing career before packed baths, he delighted all audiences with his skills.