On this day in 1896, the great Coach Stan Brauninger was born……. 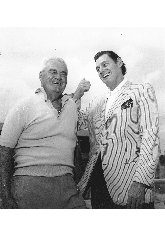 FOR THE RECORD:  Only US coach to produce national champion men’s and women’s teams in both swimming and diving. His teams won the National AAU Championships 6 times. Coach of 5 Olympians.

Stan Brauninger is the only coach who turned out U.S. National Champion men’s and women’s teams in both swimming and diving.  His teams won the national AAU championships six times, and were runner-ups on at least nine occasions.  His swimmers extended from national highpoint winners Wally Laufer in the early 1920s to Adolph Kiefer in the early 1940s.  In 1926 Brauninger’s Cincinnati “Y” won the nationals with four men, as one man, Wally Laufer (including relay points) outscored all other teams.  Laufer, crown prince to Weissmuller in those years, was on two Olympic teams as was his team member Olympic gold medalist Jack Glancy.

Brauninger’s prowess as a diving coach became apparent when he coached the Chicago Lakeshore Athletic and Medina “Towers” Clubs during the 1930s and the early ’40s.  His Olympic divers included Wally Colbath, Al Green and Miller Anderson.  Colbath later became the first “Jack Armstrong, All American Boy” of radio.  But Stan Brauninger’s No. 1 All American Boy was Adolph “Sonny” Kiefer, the backstroke All-Everything who Stan legally adopted.  Kiefer began with Brauninger in 1933 at fourteen, when Stan got him a job operating the Lakeshore Club elevator so he’d have the carfare to get to and from practice.

According to Kiefer, “Brauninger’s outstanding record as both Athletic Director and Swim Coach was due at least in part to the fact that he actually lived in the club and was always  available.  His devotion to his athletes was sincere.  he was lovable, masterful, plain spoken–a leader in style, technique, and motivation.  He kept his swimmers on target in life as well as in the pool.”

In the 1970s Stan Brauninger no longer teaches kids to swim.  Retired to a fishing boat in Florida, he competes daily for the biggest catch, brags a little during show and tell, then feeds the whole neighborhood.  “So what’s new”, says Adolph Kiefer.