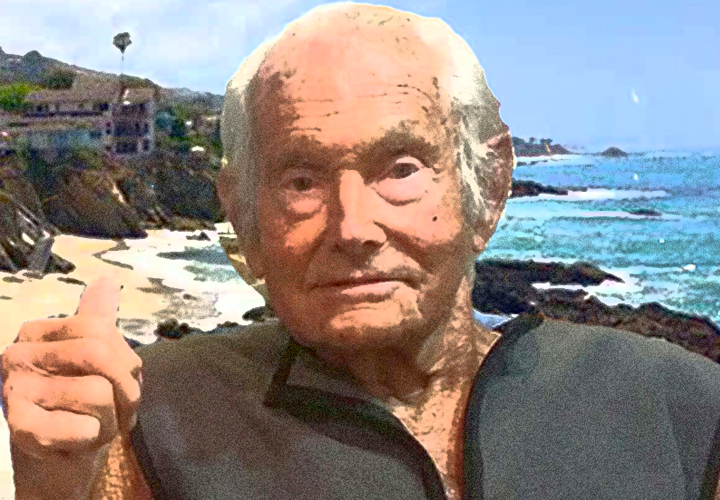 He is survived by his nephew and niece, Rick and Melissa Hopping of New Jersey. Bruce was a local legend. He could be seen every day walking down Thalia Street to the beach where he was a regular for the last six decades.

His life story reads more like a novel than reality. He was born in 1921 to W. Frank and Edith Hopping in Saigon, then a part of French Indo-China. His father had lumber interests in the region, and the family was on their way to Borneo. Bruce spent his early years on the islands of the Pacific, where he developed a lifelong connection with the ocean. At 13, he was sent away to Culver Military Academy in Indiana. At 18, he enlisted in the Army and was stationed at Ft. Riley, Kansas.

Afterward, he transferred to Shepphard Airfield Base in Texas, Westover Air Base in Massachusetts, El Toro in California, Kaneohe Naval Air Station in Hawaii, and Clark Air Base in the Philippines. In World War II, Bruce was a med-evacuation pilot who retrieved the wounded bodies of soldiers from various Pacific theaters and returned them to the base hospital for treatment. One day, he was sent up with a spotter in typhoon  to locate a downed C 47.

Their Stinson plane was blown several miles off course, they ran out of gas, and crashed into the Pacific Ocean. For the next several weeks, they floated on a one-man raft in the ocean, enduring violent storms, tumultuous waves, and shark-infested waters, before eventually washing up on the Polillo Islands in the eastern Philippines. After a series of difficult setbacks, and with the help of locals in canoes, they eventually made it back safely to Manila, despite the presence of Japanese soldiers in the area.

After World War II, Bruce taught at Bainbridge Air Base in Maryland. When the Korean War broke out a few years later, he was transferred to Barbers Point in Hawaii, and then put on a minesweeper ship bound for the Korean peninsula. After the subsequent deaths of his parents, Bruce took his inheritance and created the New Jersey Foundation in 1953. Over the next decade and a half, the New Jersey Foundation sponsored numerous important aqua-athletic events and commissioned multiple notable works of art. Inspired by visits he had made to Laguna Beach in 1942 while stationed at nearby El Toro, Bruce relocated to Laguna ca. 1960.

In 1966, he met Dr. Ted Brunner, another Laguna Beach resident, and founder of the Classics Department at UC Irvine. Dr. Brunner introduced Bruce to the ancient Greek educational concept of Kalos Kagathos, which emphasizes physical distinction and nobility of mind. Inspired by the concept, Bruce renamed his foundation the Kalos Kagathos Foundation in 1968.

For fifty years, Bruce and his foundation have been recognized internationally, nationally, at the state, county, and city levels for numerous contributions to water sports, arts, and the environment. His cultural exchanges for swim, surf, and water-polo teams have included multiple events on every continent except Antarctica.

He is an Emeritus patron of the ISHOF, patron of the AAU, FINA, ISA, CIF, OCC Rowing, and a two-time Olympic swimming judge. He has been formally acknowledged by various officials, governors, ambassadors, diplomats, provincial administrators, tribal chiefs, warrior clans, and others. Since 1968, Bruce also has worked tirelessly through the Kalos Kagathos foundation to ensure that Laguna Beach retains its historical legacy as an international destination promoting water sports, arts, and the environment. His local contributions are too numerous to , but include multiple proclamations by the city council and schoolboard. Very few Laguna Beach residents have left such a lasting indelible impression on this city, and nobody as much on Thalia Street Beach as Bruce Hopping. Please  us for a celebration of his life on Thursday, June 14 (4 pm) at Thalia Street Beach for a paddle-out and swim. Learn more about this legendary man and the Kalos Kagathos Foundation through the words of those who knew him best. And, in his own words, “Keep the faith!”