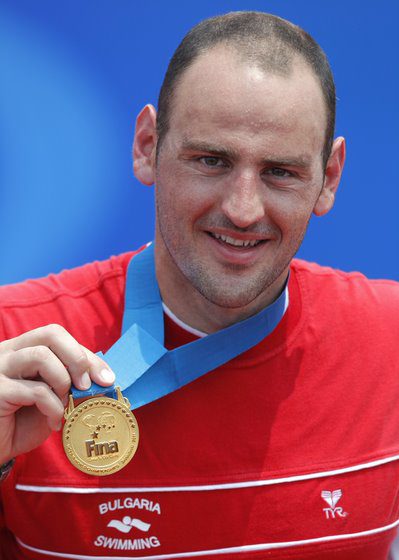 The Poseidon Award is presented annually by the International Swimming Hall of Fame to the organization or individual for high level achievement from personal effort or initiative in a field of endeavor that contributes to the performance of marathon swimmers or to the development and status of Marathon Swimming to the world.

This year’s award honors Petar Stoychev.  As a swimmer he has won an unprecedented eleven consecutive FINA Open Water Swimming Grand Prix titles, with over 60 victories in individual professional marathon swims, including the 42 km (26-mile) Traversée Internationale du Lac Memphrémagog in Canada, the 36 km (22.5-mile) Around the Island Swim in Atlantic City, USA, the 32 km (20-mile) Maratona del Golfo – Capri Napoli in Italy and the 57 km (36-mile) Maratón Sante Fe – Coronda, Argentina. He was the 2011 FINA 25km World Champion and has six FINA World Championship medals. He competed in four Olympics in both the pool and Open Water and was the flag bearer for the Bulgarian Olympic Team at the 2008 Beijing Olympics. Petar was the first swimmer to cross the English Channel in under seven hours and has set Ice Swimming World Records.

He has served as a swimming administrator/coach for the last 10 years.  From 2009 to 2017 on the FINA Athletes Committee, in 2013 as Sports Minister in Bulgaria, a Board Member of the International Ice Swimming Association, coaching other professional swimmers and Team Manager of his club Levski.