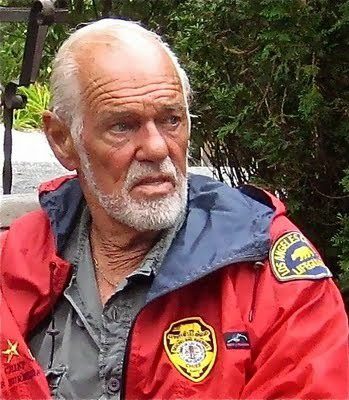 Bob was perhaps the best known and most iconic lifeguard in the
United States. His contributions to water safety are extraordinary. His love of
aquatics was probably most influenced by his stepfather, 1920 Olympian and
ISHOF Honoree, Stubby (Harold Herman) Krueger, and his mother, Jane Mackenzie,
who was a Ziegfeld Follies dancer.

Bob was hired as an ocean lifeguard by Los Angeles County in
1951. When a representative of Surf Lifesaving Australia met with Los Angeles
County leaders, Bob was appointed to become the president of what was to be
called the “Surf Life Saving Association of America”, created solely to compete
in an international lifesaving competition to be held in Australia during the
year of the 1956 Olympics. Bob was a member of that team, which had never
competed in an international lifesaving competition. Bob placed third in the
international belt race at Torquay Beach.

In 1963, Bob invited lifeguards from various lifeguard agencies
in Southern California to meet and discuss the concept of creating a true
national association of professional ocean lifeguards. The various delegates
agreed, and in 1964, the “Surf Life Saving Association of America” was formally
created as a nonprofit organization of professional beach lifeguards. Bob was
elected president and served in that capacity for four years. The organization
changed its name twice, and it is known today as the “United States Lifesaving
Association”.

In 1967, Bob served as manager of a new competition team, which
toured and competed in Australia and in New Zealand. The following year, 1968,
he toured the East Coast of the US to promote membership and to broaden the
interest in and to help move the organization toward a true national base. Bob
designed and produced the revolutionary plastic “Burnside Rescue Can” (patrol
can), which is now a standard for lifeguards worldwide, and an iconic symbol
for beach lifeguards. It was the symbol for the TV Series “Baywatch”.

Professionally, in Los Angeles, Bob was instrumental as a member
of the affirmative action committee to mandate women’s rights to take the beach
lifeguard test that led to the hiring of the first female ocean lifeguards by
the department. He eventually rose to become the chief lifeguard of Los Angeles
County. During his tenure, Los Angeles County created the first lifeguard
paramedic program, a hyperbaric chamber, lifeguard certification program and
pioneered the “prevention first” concept in lifeguarding. Previously the
profession had focused primarily on “reaction” to people in distress, rather than
“preventing” distress. Also, during his tenure, most of the municipal beach
lifeguard agencies in Los Angeles County were merged into a single county
agency, which continues to exist today.

Bob is the founder of “Club Tortuga” a USLA approved Mexican
water safety development project. As part of this operation, the first Spanish
beach lifeguard training manual was developed, primarily as a translation of
the USLA Training Manual. He also organized the development of a video
depicting lifeguard issues throughout Mexico and coordinated on-site training
and political support for Mexican lifeguards. Those efforts established
Mexico’s first government beach lifeguard employees, now serving under the
state fire division chief.

Bob earned the Australian Bronze Medallion, the Canadian and
Royal Lifesaving Instructors Certificate, the New Zealand Instructor
Certification and the American Red Cross Instructor Certificate for first aid
and water safety. He has been certified by the USCG as a rescue board operator
and he was part of the first certified Los Angeles County Diving Scuba
Instructors and a longtime member of the Department’s underwater rescue and
recovery unit, which was the first such team in the West!

Bob was a Grand champion in World Body Surfing in 1989, and for
13 consecutive years, the winner in his age division. He has been a masters
division national champion twelve times at the USLA National Lifeguard
Championships in the Iron Man, swim rescue board and rescue race events. He has
been a national master’s division swim champion and a National Dorymen’s
Association Champion, and winner of the Masters Inter-Mountain Downhill Ski
Championship!

Burnside will be missed by the many lifeguards around the world
who he helped, and friended through the years.