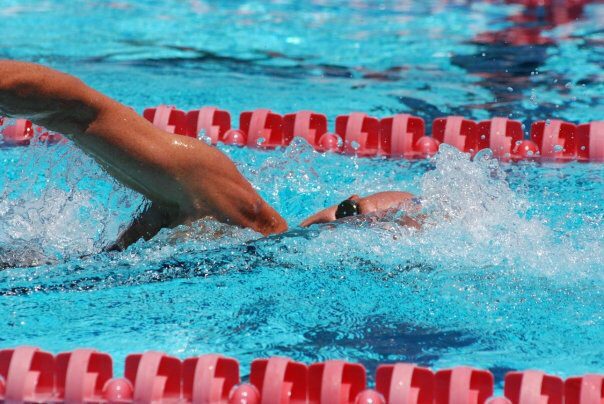 The International Masters Swimming Hall of Fame (MISHOF) is proud to announce that Rowdy Gaines, will be inducted into the Masters International Swimming Hall of Fame as a member of the  Class of 2019 during the MISHOF Induction ceremonies in St. Louis, MO, on Friday evening, September 13, 2019, to be held in conjunction with the United States Aquatic Sports convention.

As a sprint freestyler, Ambrose “Rowdy” Gaines became a legend when he overcame the disappointment of the 1980 Olympic boycott to win three gold medals at the 1984 Los Angeles Games.

Then, in 1988, Rowdy got involved in Masters swimming when the legendary Tiger Holmes asked him to be a part of his Holmes Lumberjax Masters team and join them on their trip to the FINA Masters World Championships in Australia.

In 1991, Rowdy’s athletic pursuits in Masters Swimming came to a halt, when the swimming champion was diagnosed with Guillain-Barre syndrome, a rare condition in which a person’s immune system attacks part of their peripheral nervous system.  He made a full recovery after only two months of treatment, eventually integrating swimming into his physical therapy routine.

In Masters swimming, Rowdy has broken 26 FINA Masters World Records (19 long course and 7 short course), 24 individual USMS records and has competed in four different age groups. Gaines has been in the Top Ten 17 times and he has had 57 swims ranked in the top ten.  Rowdy has attended only two FINA World Championships, and only one, swimming in individual events, so he has accumulated most of his points through world records, world rankings and top ten standings.

The longevity of some of Rowdy’s world records is incredible.  His longest standing world record of his 200m freestyle record in the 30-34 age group that was set in 1989 is still standing after 30 years.

Rowdy recently turned 60 and is hoping to swim in future Masters meets. Every year, he hosts the Rowdy Gaines Masters Classic, a Masters swim meet held every October in Orlando.  This year will be the 11th annual.

Gaines will be inducted as part of a group of nine (9) outstanding individuals that will be inducted at MISHOF’s annual ceremony. The event will be held at the Hyatt Regency St. Louis at the Arch in conjunction with the 2019 United States Aquatic Sports Convention.

The event is open to the public and free of charge.