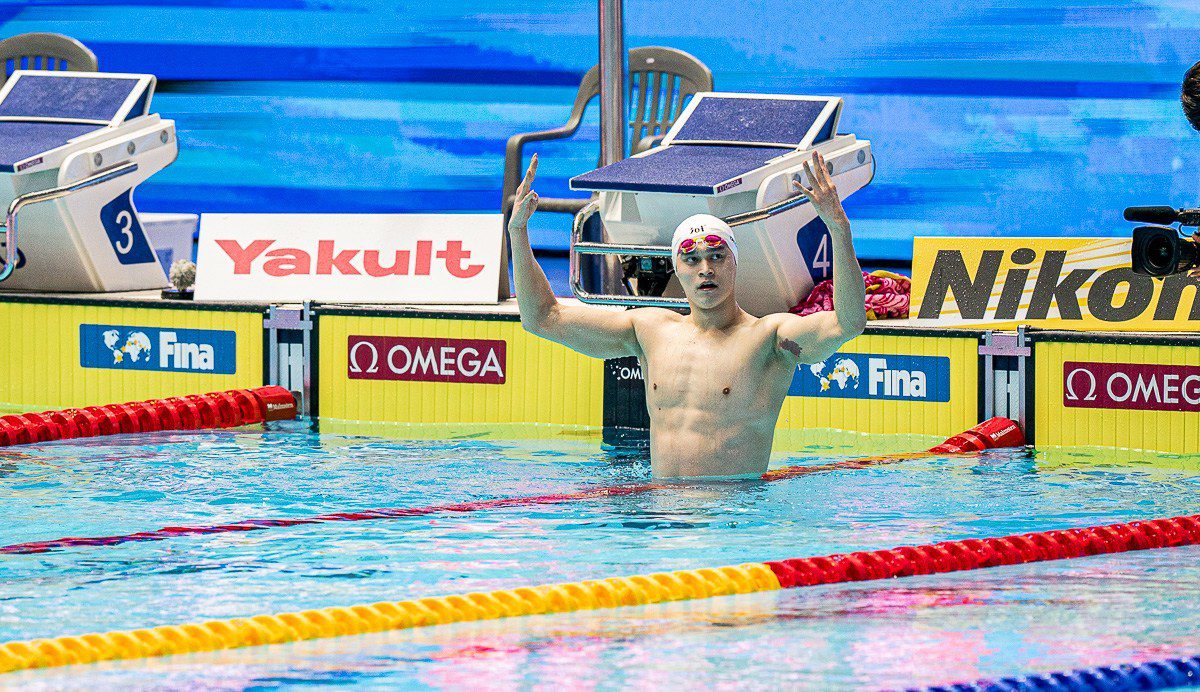 In a severe turn of events in the pool on Tuesday night at the 2019 FINA World Swimming Championships in Gwangju, China’s Sun Yang won the 200 free final with a 1:44.93. Lithuania’s Danas Rapsys, who originally touched first at 1:44.69 was disqualified for a false start. The DQ became official immediately after the race for movement on the blocks.

The large contingent of fans from China on the lane 8 side of the pool screamed and shouted in delight when the official results were flashed on the scoreboard, with the rest of the pool jeering and booing the outcome.

Sun has been the talk of the venue in Gwangju this week after his controversial past with doping. The controversy came to a forefront when Australia’s Mack Horton lodged a silent protest in the medal ceremony of the 400 free on Sunday night, much to the delight of majority of the athletes competing.

Had Rapsys’ win counted, it would have been the first medal of his career at the World Championships. He would have moved up to eighth all-time.

“My victory was because of my hard work,” Sun said after the race. “I continued to keep fighting, I didn’t give up when I was in second place.”

“I was the only one to enter the 800 this morning, so I was very tired. I just slept for an hour and a half this afternoon.”

“I guess I’ve sort of got to celebrate off someone else’s misfortune,” Scott said after the race. “I’d liked to have done it outright but it’s my first ever individual worlds medal so I have got to be happy with that and try and move things on in the rest of the week because I’ve still got more events to come.”

“To be perfectly honest I’ve definitely got more in there time wise. I have done a lot of 1:45s and I’ve swum them a lot of different ways as well. Learning but then I’m just disappointed I wasn’t able to go in there and get a best time. It’s two years now and I’ve not really moved it on timewise. It’s good that I am now consistent and I have been consistently dropping 1:45s at major meets which is good but it’s now trying to move that on as well.”

Early leader Clyde Lewis of Australia finished in sixth at 1:45.78. He was leading the race through 150 meters but fell off big time on the final. He had a meteoric rise last night in the semifinals, swimming a huge best of 1:44.90 last night to move him up to 10th all-time.

More controversy came about during the medal ceremony when Scott refused to take a photo with the medalists, shaking hands with Malyutin and Matsumoto, but refusing to make eye contact with Sun. Scott then took a photo with his medal alone but not with the other three medalists. He walked off after the ceremony was over and waved at the crowd.