Swimming Hall of Fame complex might be in line for stunner of a makeover. The cost: $90 million. FORT LAUDERDALE — An extreme makeover could be coming to two International Swimming Hall of Fame buildings that perch like bookends on either side of Fort Lauderdale’s aquatic center.

The $90 million project would bring two sleek new towers — a five-story museum and a five-story welcome center — to the city-owned parcel between the Intracoastal and Seabreeze Boulevard, just south of Las Olas Boulevard.

Commissioner Steve Glassman argued in favor of the project, saying it would dovetail with the city’s $47 million renovation of the Fort Lauderdale Aquatic Center, which broke ground in April 2019 and is expected to wrap up in September.

The plan to revamp both Hall of Fame buildings would complete the 5-acre peninsula, Glassman said.

“Folks love the conceptual design,” he said. “The entire aquatic community is thrilled about returning to Fort Lauderdale and seeing this project happen. I think it’s a must.”

The two-story welcome center on the east end of the man-made peninsula would be knocked down. So would the two-story museum on the west end overlooking the Intracoastal. Both buildings were built in the mid-1960s and are in dire need of repair, according to the developer.

Big change is in the works for the International Swimming Hall of Fame, which shares space with the Fort Lauderdale Aquatic Center on a 5-acre man-made peninsula that juts into the Intracoastal Waterway. The nonprofit hopes to bring a new museum to town. (Arquitectonica/Arquitectonica)

If the project gets the green light, the new towers would open by 2025, says Mario Caprini, CEO of Capital Group P3 of Florida.

The financial model hinges on space for tenants. Under the current proposal, the developer would pay for construction with the city guaranteeing the loan for both buildings and contributing $5 million over the course of a 30-year master lease.

Final approval is likely months away. If commissioners kill the deal, taxpayers will be on the hook for $2.4 million to reimburse Hall of Fame Partners LLC for preliminary work done on the site. Commissioners agreed to those terms last week.

City officials first got a look at the plans in September 2020, when the Hall of Fame Partners — a partnership between Capital Group P3 and Hensel Phelps Construction Co. — submitted an unsolicited proposal to redevelop the buildings at the Hall of Fame complex at 501 Seabreeze Blvd.

Hensel Phelps is the contractor handling the renovation of the aquatic center.

RELATED: Pool for the stars: New Hall of Fame complex on the way with dive tower to the sky »

Here’s what’s planned: Though only five stories, the museum would stand 105 feet high — equal to 10 stories — on the west side of the peninsula close to the Intracoastal. The welcome center would be slightly shorter at 94 feet and sit on the east end near Seabreeze Boulevard.

The two new buildings would stand even higher than the aquatic center’s new dive tower, the western hemisphere’s tallest at 27 meters, or 89 feet.

The design for the west tower calls for a new 20,000-square-foot museum, a large ballroom and a rooftop restaurant with outdoor dining, as well as a covered teaching pool. According to the developer’s pitch, visitors would have breathtaking views of the Intracoastal to the west and the aquatic center and the ocean to the east. The plan would also create enough parking for 202 cars and a public promenade at the western end of the peninsula lining the edge of the Intracoastal.

A rendering of the two new International Swimming Hall of Fame buildings that would sit on either side of the Fort Lauderdale Aquatic Center. City commissioners have not yet signed off on the $90 million project. (Arquitectonica/Arquitectonica) 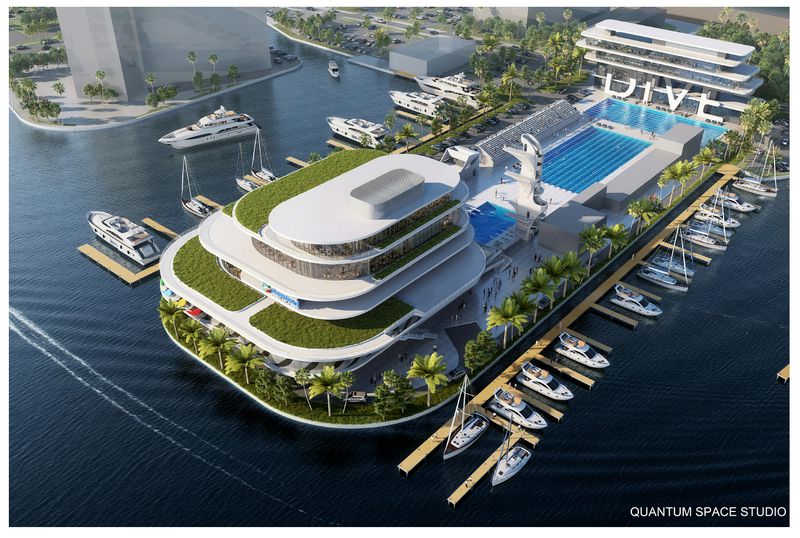 The east tower would serve as a gateway to the aquatic center and would feature a street-side café, new offices for the city’s lifeguards and leasable commercial space. Two outside terraces would let visitors enjoy their coffee while taking in views of both the beach to the east and the aquatic center to the west.

According to the developer, if the existing buildings were to be left standing, they’d need $18 million in work to stay open beyond the next decade. And the city would be required to make those upgrades under the current lease. The cost to taxpayers would increase to $33 million if the city were to borrow the money through a 20-year bond.

If the project gets built, the city would take ownership of the buildings in 30 years for $1.

Susannah Bryan can be reached at sbryan@sunsentinel.com or on Twitter @Susannah_ Bryan