The Importance of “A Film Called Blacks Can’t Swim” 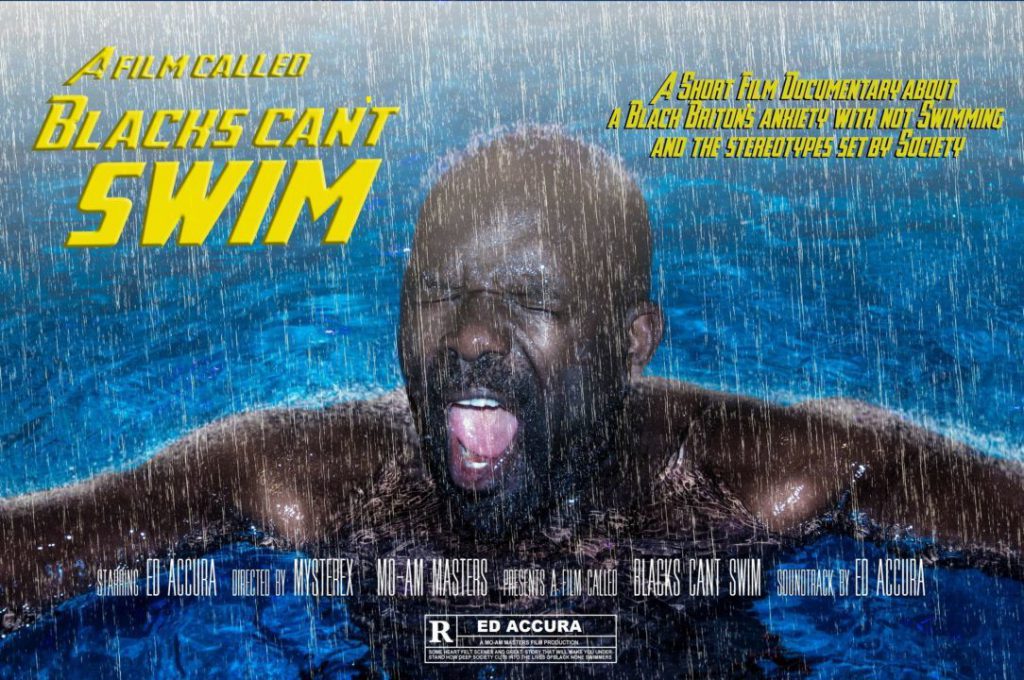 Black History Month is a time for us in the aquatic community to reflect on why more African Americans and people of color don’t swim.  Especially because for 400 years (the period from from 1451 – 1860), Africans, Native Americans and the indigenous populations of Oceana “excelled all others in the arts of swimming and diving”.  The cultural history of swimming is both tragic and fascinating and while it helps explain how people of color lost their aquatic traditions and how European/Caucasians became the most accomplished swimmers – it’s only part of the story.

Recently, A Film Called Blacks Can’t Swim was released on the .  I was lucky enough to see it before its release. It’s just 33 minutes long, but it touches on all the important cultural stereotypes and excuses that keep Blacks and other minorities out of the water.

A Film Called Blacks Can’t Swim is about British hip-hop artist Ed Accura’s fears and anxiety with swimming. The film depicts the effects of the stigma, stereotypes and myths and also highlights the views of various people in his community. The aim of the film, he says, is to help eradicate the negative views associated with black people and swimming as well as encouraging more to swim thus reducing the number of deaths by drowning.

Ed plays “Frank Awuah” a neurotic character who, after hearing a news report about the inevitable floods from global warming, develops a phobia for water because he can’t swim. He buys a life jacket and wears it everywhere.  His friends think he’s gone loony. “Frank, if you’re worried about drowning just go learn to swim.” But Frank has a little devil in his ear that keeps telling him “Blacks can’t Swim!” “Your bones are too dense!” “Blacks can’t even float, ha ha!” All the negative messages you can imagine.

In between the vignettes of Frank’s inner voice telling him he can’t swim are interviews with Frank’s friends who do their best to dispel the myths and stereotypes and discuss their ideas why Blacks don’s swim.  “It’s fear!” “It’s a middle-class upper class thing.” “It’s expensive”  “Chlorine and chemicals ruins our  and skin.” “People are ashamed to admit they can’t swim so they just stay away from the water.” “It’s not part of our culture.” “We have other priorities!” “Look, if you ask Black people if they can swim 500 yards they look at you like you’re from another planet.”

One of Frank’s friends says he learned because it was part of his school’s curriculum. Several other had children who could swim. Another tells of a school swimming class. He could swim “ok”, but not as good as the white kids, but he was better on the track. This discouraged him and confirmed the stereotype about swimming, so that was it for swimming.

In one of the last scenes, Frank, wearing his life jacket, is driving his car. His wife is in the passenger seat. “You’re being ridiculous, why don’t you just learn to swim,” she says. “But Blacks can’t swim!” – he retorts.  In the back seat is Frank’s daughter.  “But I can swim daddy,” she says.

The film ends with Frank in the pool and an image of 2016 Olympic champion Simone Manuel.  Of course Blacks can swim! Interestingly in an  interview, Accura relates that one of the reasons he never learned to swim is that he was comfortable in the stereotype that “Blacks can’t swim.”  He also believes that today, it is a matter of priorities. It’s just not a priority within the minority community.

It should be.  But it’s not just a matter of water safety. All humans spend their first nine months as swimmers.  When we emerge from the womb we all have the bradycardia reflex, which is part of the mammalian diving reflex – just like dolphins, whales and seals. When our faces are exposed to cold water as infants, our hearts slows down and blood is shifted away from the peripheral muscles to conserve  for the brain and heart, and we hold their breath. We are of the sea and it is no coincidence that our body fluids are nearly identical to sea water. There is something that is spiritual, if you will, about the water.

In his book, the Blue Mind, Dr. Wallace J. Nichols, explores the Surprising Science That Shows How Being Near, In, On, or Under Water Can Make You Happier, Healthier, More Connected, and Better at What We do. In addition learning-to-swim can open minds to the two-thirds of the planet that is covered with water and  to the innumerable recreational and opportunities that are denied to those who cannot swim.

Accura is to be greatly commended for exploring this issue and changing world culture where everyone can swim.  The earth is, after all, the only planet we know of that has liquid water. How can you be an earthling and not know how to enjoy an element that covers 2/3rd of our planet.

To learn more about the film and to support it: Click Here