We look back on one of ISHOF’s first Masters Swimmers, Tim Garton, as we celebrate what would have been his 78th Birthday 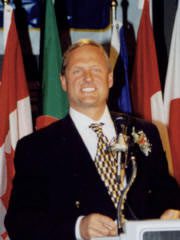 After all, swimming was a big part of his family.  He learned to swim at age two and one-half in Elkhart, Wisconsin.  But, after that age, his older and bigger brother began holding him underwater.  Tim didn’t receive any sympathy from his mother, and she informed him he would either have to get tougher or learn to swim better.  So, she woke him every morning at 7:00 a.m. to train until he got as strong as his brother.  Although he succeeded in a few months, the workout routine lasted a lifetime.

He swam in the AAU Wisconsin age group program and in high school, but his first big opportunity to swim in a serious program came when he attended Yale University from 1960 to 1964.  Yale workouts were approximately 2000 yards in distance and represented a 500% increase over his minimal high school program.  He faced daily workouts with 1964 Olympians Steve Clark and others, resulting in faster times in all events.  He was twice elected to the NCAA All American team, based on relay performances.  He failed to make the 1964 US Olympic team after graduation, but the pent up frustrations of not having achieved his swimming goals may have given Tim the motivation to prove himself in the Masters Swimming program once it started in the early 1970s.

Garton moved to Vail, Colorado in  1967, and has lived there ever since.  In 1972, he read about the results of the Masters National Championships, and he and his close friend Chuck Ogilby of Indiana University, decided to train for the 1973 championships.  He was the surprise new comer, winning the 200m IM and 200m and 100m freestyles, setting a national record in the 100m, the first of 144 national records through 1996.  The older he got, the faster his times were improving.  By his late 30s and early 40s, his times compared favorably with some of his college efforts.

In 1984, Tim hired Mark Schubert’s assistant coach at Mission Viejo, Al Dorsett, to work closely with him to help develop a Masters program and build a better swimming facility in Vail.  All three endeavors succeeded.

Tim competed in the first International and World Masters Championships and throughout the past seven championships has won 36 gold, three silver and one bronze.  Twenty gold medals were earned in the 40-44 age group, and he won no less than six titles at each championship in 9 events – 50m, 100m, 200m, 400m freestyle, 50m, 100m butterfly, 50m breaststroke, and 200m, 400m IM.  His versatility is overwhelming, and he has set 39 world records in the freestyle, butterfly and individual medley, to the present.

In 1991, Tim was diagnosed with lymphoma, considered an incurable cancerous disease of the lymph system.  During chemotherapy and radiation treatments, he continued to train at reduced levels.  When his cancer was declared in remission, in August of 1991, some of the doctors credited his devotion to swimming as being largely responsible.  In 1992, he started competing again, and in the World Championships in Indianapolis, he won his 100th national and international victory by winning the 100m freestyle.  Tim has been a member of the United States Masters Swimming All-American team every year from 1979 to 1996.  He was the first man in the 50-54 age group to lower the USMS national record for the 100yd IM to under one minute, a time many of the 25-29 swimmers wish they could do.

Tim Garton lost his battle with cancer in late April, 2016.  His wife Mara, still keeps Tim’s memory alive at ISHOF and recently become a member of the One in a Thousand Club!